Sometimes you read records and you wonder how much bad luck one person can handle. While doing research for a client I came across the following baptism in a transcription of the Roman-Catholic baptismal records for Venlo in 1750-1760:1 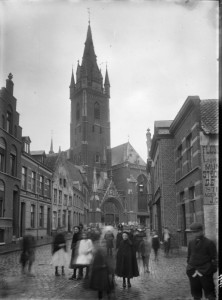 As all Roman Catholic baptismal records, this one is in Latin. It translates to:

13 November 1751
Anna Elisabeth was rebaptized conditionally, illegitimate child of Andreas Ketels and Gertrudis Podor who are blood relatives in the second degree of blood relationship. Was presented to the baptism by Jacobus Podor and Anna Elisabetha van Cauwenbergh.

OK, that’s a little easier to understand but still full of technical terms. Let’s break it down.

First the ‘rebaptized conditionally.’ When a child was in distress during labor, and it was feared that it would not survive the birth, a midwife would sometimes insert a sponge into the birth canal to baptize the child while it was still alive, in the hope of saving its immortal soul. It was uncertain if such a baptism performed by a lay person ‘counted’ so any child who survived was baptized again by a real priest. But since no child could be baptized twice, the second baptism was done under the condition that the first was invalid.

The ‘spurius’ reference tells us that Andreas Ketels and Gertrudis Podor weren’t married. They could not be married anyway, since they were related in the second degree and the Roman Catholic church forbade marriages up until the fourth degree unless the couple acquired a dispensation. And the way they counted wasn’t in the couple’s favor either: they would count the number of generations to the common ancestor (unlike today where they count the number of parent-child relationships in between two people). Anna Elisabeth’s parents were related in the second degree, which meant that they shared grandparents. In other words: they were first cousins. But in the Catholic Church, even third cousins would have needed a dispensation.

What does all this mean for poor Anna Elisabeth? Her parents were “kissing cousins,” who could not get married because they were too closely related so had her out of wedlock, and she almost died while being born.

What happened to Anna Elisabeth?

If any of you know what became of Anna Elisabeth Ketels, please leave a comment. I would love for the story to have a happy ending after such a tragic start.