The most important figure in the Secession of the Gelderland Reformed church was without a doubt Anthony Brummelkamp.

Anthony Brummelkamp was born in Amsterdam on 14 October 1811 as the son of Johannes Brummelkamp and Anna Henrietta Hesselink. In 1828 Anthony Brummelkamp started his studies at the Athenaeum in Amsterdam and in 1830 he was enrolled as a student in Theology at the University of Leiden. After graduating and accepting a call to the Dutch Reformed Church in Hattem, Gelderland he married Maria Wilhelmina de Moen in Leiden on 16 August 1834. Maria Wilhelmina had been the widow of Caspard Tieleman since 1828, with whom she had been married for two years.

On 19 October 1834, Anthony Brummelkamp was confirmed as minister of Hattem in the province of Gelderland. Like De Cock in Groningen, he too was an inspiring preacher. He drew such large crowds from the towns and villages around Hattem, that the constable was asked to help keep the order. The church of Hattem nearly wasn’t big enough for all the listeners. Hattem people complained not being able to enter the church because it was full with ‘strange’ people. 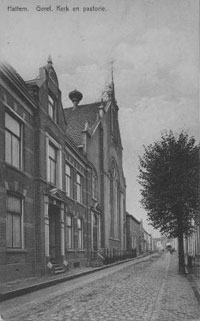 Within months after being confirmed, Brummelkamp became involved in arguments over the baptisms of children whose parents didn’t go to church. Also, he refused to sing Evangelic Songs. Because of these actions, he was removed from his profession by the provincial church board October 7, 1835. When Brummelkamp received this news two days later, he called a meeting with the church council. He asked them what their opinion was regarding his removal. All except the deacon Gerrit Geerlings, agreed with the provincial church board.

Soon after 9 October 1835, about 130 adult members seceded from the church, along with about 75 children of their children. Early in 1836, a group of 27 adults and 19 children joined them. On 21 November 1835, the Seceder community of Hattem was officially proclaimed in the millhouse of Steven Jans Mulder. Dirk Bleijenberg was appointed elder, and besides the ‘loyal’ deacon Gerrit Geerlings, Hendrik Boer was appointed deacon.

To prevent him from preaching, soldiers were given quarters in the house of Brummelkamp. This didn’t stop him, however. Illegally, and therefore punishable he led several church ceremonies standing on a chair in the yard of a farm or in a barn, near the Wapenveld mill, etc., for which he received 33 fines making up thousands of guilders.

Because of these hard circumstances, Brummelkamp stimulated his followers to emigrate to the United States. He wrote a booklet about this together with A.C. van Raalte.

Even though he was one of the major supporters of emigration, Brummelkamp himself did not emigrate. He chose to stay in the Netherlands where he later became a professor of theology. He died on June 2, 1888 in Kampen.