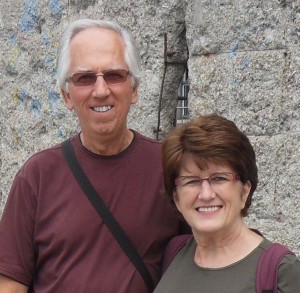 Two years ago, I helped a client, Mr. Dennis Brink, find out exactly where his family was from. He kindly agreed to let me share our story of discovery of the origins of his immigrant ancestor, Lammert Huybertsen Brink, with you.

When Dennis Brink first contacted me, he provided the following information about his New Netherland ancestor, Lammert Huybertsen Brink:

Dennis Brink wanted to know when his family arrived in the New World and where his name came from. He was going to be in the Netherlands and would really like to see some original documents about his immigrant ancestor.

The 1660 court record is the type of record that anyone hopes to find for his immigrant ancestor: it ties the ancestor to a place of origin, explains the name and names his parents and siblings. Mr. Brink really wanted to see this record and confirm the information. The court record and the passenger lists show Lambert Huybertse using his patronymic only. But the court record ties him to the Dolderbrink, which explains why the family later used the name Brink.

The first passenger list and the court record are both derivative records of unclear provenance: it is unknown who compiled this information and whether they used the original source. The two passenger lists are in conflict with each other: while they both seem to refer to the same ship, they apparently refer to two different voyages.

If Huybert Lamberts was still in Wageningen in November 1660, as the court record implies, he cannot have traveled to New Amsterdam in December 1659. Consulting the original court record should reveal whether Huybert was actually there, or represented by his siblings. The court record also gives an explanation for the adoption of the name Brink: the family lived on the Dolderbrink in Wageningen.

A ‘brink’ is a village green. In the area around Wageningen, there are several ‘brinken’ which act like small hamlets. A usually triangular shaped area is surrounded by farms. These farms had joint use of the green. On the green, which had a watering hole, they would collect their cattle and then drive them to the meadows. The brink at Dolder is very old. The name Dolder is first recorded as “Thulere” in a charter of 838.4

The citation for court record at the Archives of the Kingdom at Arnhem probably refers to the former Rijksarchief in Gelderland, which is now part of the Gelders Archief. The “Protocol van Vestenisse” is a type of court record that records transactions of real estate, similar to a deed book in the United States. The online finding aids at the Gelders Archief shows that they no longer have the court records for Wageningen, they have been turned over to the Wageningen municipal archives. The finding aid at the Wageningen municipal archives website confirmed the presence of court records for this period.

In August 2012, Dennis and Sheryl Brink and I went to the Wageningen archives together. We opened the register that should have the 1660 transaction and on the very first page, we found the record we were looking for.

Sale of the house at the Dolderbrink, 26 November 1660

Abstract of the record:5

Jantjen Joosten widow of Huijbert Lamberts, assisted by her chosen guardian Claes Jansen, for one half, and Lambert Huijberts, Peter Huijberts and Claes Jansen as husband on behalf of his wife Gijsbertje Huijberts, and for the other minor children, their brothers and sisters, all heirs of the late Huijbert Lamberts their father, for the other half, declared to have sold and transport to Gerrit Hendericksen Hindercamp and Aeltgen Toenissen his wife and their heirs, certain house and yard in the Dollerbrinck in the neighborhood of Waegeningen, having towards the east the widow of Esq. Lauwijck, west Cornelis Gerritsen, south Jegerscamp, north the Dollerbrinck.
26 November 1660 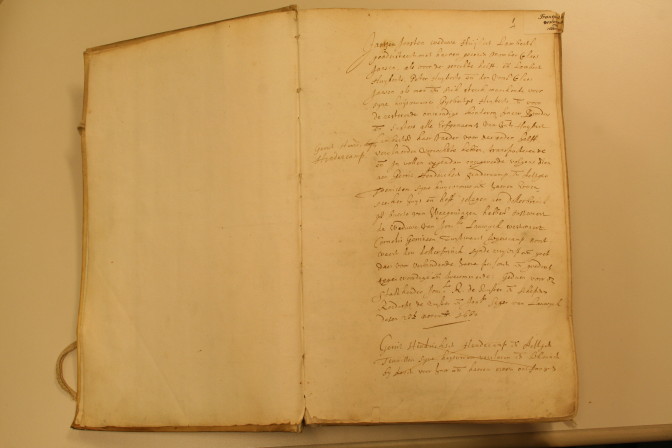 The formulation makes it clear that Lambert Huijberts was present when he sold his share in the house of his father, together with his mother and siblings. This eliminates the 1659 departure date. If he did leave on 13 or 24 December, that would be two to three weeks after this sale. He may have used the proceeds of the sale to pay for his voyage. The record also shows that the correct date was 26 November 1660, not 28 November 1660 as in the abstract found online.

The next record that starts on the same page is also of interest:6

Gerrit Hendricksen Hindecamp and Aeltgen Teunissen his wife, declare to have received and be indebted to Claes Arissen and Geertgen Gerrits, spouses, the sum of 200 guilders at 5% interest, to be paid back in four years, starting from 24 June 1660. As collateral they put up the house bought in the previous record. 27 November 1660.

Since they borrowed this money on the next day that they purchased the house and used the house as collateral, they probably used the money to finance the purchase. This implies that the house was worth at least 200 guilders. Gerrit Hendricksen Hindecamp may have had some funds of his own as well, so the actual purchase price may have been higher. Since we don’t know how many siblings Lammert had, we don’t know what his share would have been. But there were at least five siblings, so his share could not have been more than 1/5 of 1/2 of 200 guilders; 20 guilders. This was probably enough to finance the voyage for him and his family, but would not have left him much funds to start a new life in the New World.

In 1647, a general tax was levied on real estate. The Wageningen ledger contains an entry for Huijbert Lammersen:7 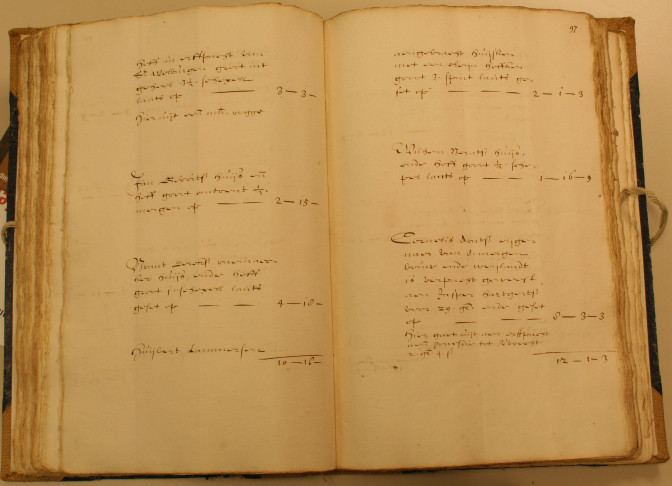 Other people on the same page all paid 3 guilders, 2 guilders, 4 guilders, 1 guilder and 8 guilders and change in tax, so all paid more tax than Lammert. Most of their houses were described as “huijs” [house], not “huijsken” [small house]. This suggests Huijbert Lammersen’s house was relatively small compared to most of his neighbors’ houses. Three “spint” in farm land is equivalent to 0.12 hectares or 0.3 acres so it is not surprising he did not have to pay high taxes.  Although they were wealthy enough to own their own home in a time when most people did not, this suggests that the family was not very well-to-do.

The adjacent entries in the 1647 tax records do not match the neighbors in 1660 transport deed so it is uncertain whether the house in the tax record is the same house that they sold in 1660. The unusual combination of the names Huijbert and Lammert makes it very likely that this entry is for the father of Lammert Huijbertsen. This record tells us that Huijbert Lammersen was still alive in 1647. He must have died between 1647 and 1660, when his heirs sold his house.

The 1660 deed tells us that the house that they sold was located to the south of the Dolderbrinck. The Gelders Archief has a map in their collection that shows the situation in 1676 (copied in 1753):8 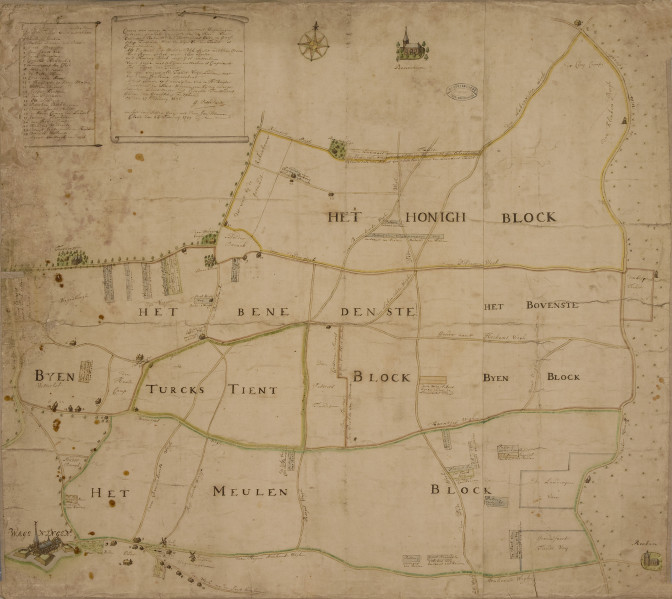 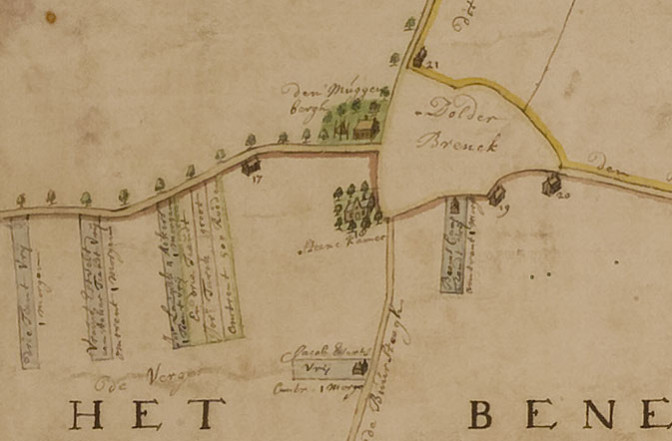 The map shows that there were three houses located to the south of the Dolderbrinck:

Since the house of Huyberts Lammerts’ heirs was bought by a Hindercamp, this makes it likely that house number 20 was the house that they sold. On the map, we cannot make out the neighbors to the east and south, just the neighbor to the west: Jeurien Dircksen. He does not match the western neighbor in the 1660 record (Cornelis Gerritsen) but that house could have been sold in the meanwhile. Dennis and Sheryl Brink visited the Gelders Archief in Arnhem to view the map in person, which was a very special moment for them.

By superimposing the 1676 map on today’s map, it was clear that the current location of the Dolderbrinck is in the middle of a modern development. We went there but no trace of the Brink remained. We then visited another brink that was still in its original form. 350 years after his family left, Mr. Brink had returned to the place where they came from.

The example of Lammert Huybertse Brink demonstrates the kind of records about your New Netherland ancestors that might be waiting to be discovered in Dutch archives. In the Brink’s case, we were lucky to have enough evidence to point to a place of origin and even a specific document. Even though the record had been moved in the meantime, the citation contained enough information to retrieve it. In other cases, more research in American records may be necessary first.

These findings provide an excellent starting point for more research into the ancestors of Lammert Huybertse (Brink). Wageningen court records go back to 1542 and the town records go back even further, to 1335. Since the family owned real estate, there should be more court records that explain how the house came to be in their possession. Studying the neighborhood using tax records and court records may allow us to prove who the parents of Huijbert Lamberts were and perhaps even prove further ancestors.

Dennis Brink achieved his goal: he got to visit his place of origin and hold original documents that mention his ancestor and ancestral home. If other descendants of Lammert Huybertse Brink want to continue the research, please contact me to discuss doing a project for you.

Note about re-use of information in this article:

All images of original documents in this article are in the public domain because of their age. Feel free to reuse them in your own family trees. A link to this article would be appreciated. The article itself is protected by copyright, so please don’t copy it but link to it instead.