When you find enough evidence to answer your initial research questions, it is tempting to move on to another family. But you can discover a whole lot more if you make the effort to find all available records. In this case study, I will show you how you can find out more about the lives of your ancestors using information from Population Registers.

When I first researched my great-great-grandmother Maria Gommeren (1864-1918), I stopped looking for records once I proved her parentage and knew when and where she was born, married and died. Wanting to know more about her life in between these events, I recently took the time to collect all the population registers for her.

Here are some fascinating details about her life that I discovered: 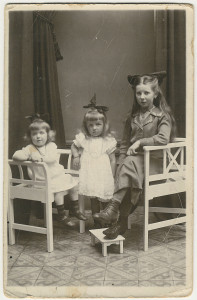 I have a family photograph of my grandmother Toos and her sister Annie (daughters of Maria Luijten’s half-sister Adriana Trouw) that also includes Maria. The picture must have been taken around 1918/1919, since Annie and Toos were born in 1916 and 1917 and the youngest girls look to be no more than three years old. This is right in the period between Maria Gommeren’s death in 1918 and Adrianus Luijten’s absence in 1920. I think Maria might have stayed with her half-sister even though that was not her official address. The population register shows that Maria moved to Velp in 1920 so that is something to follow up on. Was she sent to an orphanage?

By putting the data of all of these records together, we can ‘read between the lines’ and see the contours of a story that no record tells by itself. Unfortunately, it is not a happy tale.

The records show us a poor family, who lost a daughter. When we see all the different addresses, it suggests that perhaps Adrianus Luijten could not keep a job and did not make enough money to pay the rent. His absence after his wife’s death also indicates that he was not up to the responsibilities of raising a family.

By meticulously analyzing all the details I could find, I feel like I have come to know Maria a little. She is no longer just a name in my database.

What stories about your own family are out there waiting to be discovered?