Peter Daane was one of the Dutch emigrants who settled in Wisconsin and managed to establish a thriving business there. He fought for the Union during the Civil war. He is considered as the founder of Oostburg, WI. To this day, his descendants live in that area.

Pieter Daane was born 26 March 1835 in Westkapelle in Zeeland. He was the eldest of nine children. His parents were named Pieter Daane and Pieternella van der Driest. His father earned a living maintaining the dikes of Zeeland, to prevent the sea from re-claiming the land. His mother was working as a maid at the time of her marriage.

In 1846, grandmother Appolonia Willeboordse, the mother of Pieternella van der Driest emigrated to the United States. She took John Daane, her grandson, with her. She settled in the Cedar Grove area in Wisconsin. That winter, Johnny, a bright lad of just eight years old died. His remains were taken to Sheboygan Falls and buried.

A year later, the rest of the Daane family followed. The Daane family sailed from Vlissengen to New York on a two-mast brig, called the "Fame," which made a remarkably quick trip, requiring only twenty-six days. For some five years the family resided at Pultneyville, N. Y., where the father worked at common labor and the children received their educations. Pieters name was changed to the American Peter, which is pronounced almost the same.

In the spring of 1847 the family continued their westward course to Milwaukee on the propeller "Indian Chief." Coming on to Holland Township, the father purchased eighty acres of heavily timbered land from the Government, paying $1,25 per acre. The country was new and unimproved; Indian trails were about the only roads in existence, and everything was waiting to be developed by the skill and intelligence of the white man. Like many other pioneers, the Daane family built a cabin, cut away the trees, and thus established a home for themselves.

On 28 September 1854, Pieter Daane was married to Miss Susanna Eernisse. She was a daughter of Peter J. and Susanna (Cliquenoy) Eernisse. She was born in Cadzand, Zeeland, on 31 July 1833, being the youngest of thirteen children, nine sons and four daughters.

Peter and Susanna had the following children:

The family was a member of the First Presbyterian Church of Oostburg. 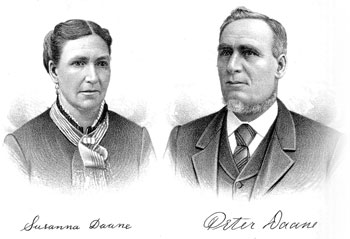 Of the Daane family three served the Union cause in the Rebellion, the father and his two sons, Adrian and Peter. The father enlisted November 17, 1863, in the Thirteenth Wisconsin Battery, Heavy Artillery, under Capt. Richard R. Griffith, of Milwaukee, and served until honorably discharged, October 22, 1864. The sons both enlisted in Company F, Twenty-seventh Wisconsin Regiment, August 21, 1862, and served their country valiantly until discharged, August 29, 1865. Peter Daane was enlisted as a private, mustered in as a Sergeant, and the last year of his service held the position of First Lieutenant of the company to which he belonged, having been promoted July 26, 1864.

Four of Susanna’s brothers served in Company F. Twenty-seventh Wisconsin Volunteers, during the late war, while her brother Isaac served as a soldier in the Fatherland.

After the war was over and his country no longer needed his service, Mr. Daane returned to the town of Holland, and engaged in more peaceful callings. In April, 1867, he built a store located on Sauk Trail Road. For six years he carried on merchandising in that place with marked success. In 1873, the Lake Shore railroad was completed to Milwaukee. Peter Daane promised the railroad company to build a free depot near his store, provided that they would move the station to the crossing one and a half miles further north. This took place and was the real start of the village of Oostburg.

In 1868 he was appointed Postmaster of Oostburg, which position he filled without interruption until 1893. Mr. Daane erected the mill in Oostburg in 1879, and also purchased the elevator. The elevator, which was built in 1879, is a substantial one, 28 x 60 feet. In 1878, Mr. Daane also purchased a lumber yard.

Mr. Daane is looked upon as a leader not only in business, but also in political circles. His fellow citizens, appreciating his ability and integrity, have called upon him to fill a number of important official positions. He was Town Assessor in 1855, Treasurer in 1860, Chairman of the Town Board of Supervisors in 1862, and again held the last named office from 1866 to 1874. He was also Justice of the Peace from 1869, and in 1873 was elected to the Assembly. In 1910, he was president of the Oostburg State Bank. 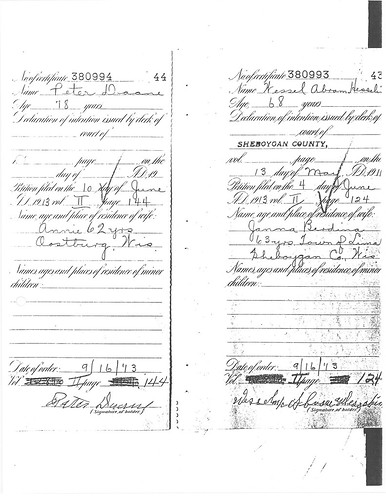 At the age of 78, Peter Daane petitioned to become a US citizen on 16 September 1913. His wavery signature on the petition is perhaps a sign of his already declining health, because he died less than a year afterwards. On June 7, 1914, Peter Daane died in Oostburg, the town he had helped found.