Hendrik Jan Debbink and Berendina Dunnewold were a part of the second emigration wave to hit Winterswijk in the 1860s. They emigrated when he was already 69 years old, together with their family of four children. They joined Berendina Dunnewold’s brother, Jan Willem Dunnewold, who was a minister in Sheboygan County, WI.

Hendrik Jan Debbink was born in Winterswijk, Gelderland on 7 August 1808 as the son of Garrit Hendrik Debbink and his second wife Janna Geertruid Debbink. As a younger son, there apparently was no need for him to get married soon. At the age of 49, he got married to 22-year-old Berendina Dunnewold. The couple was married in Winterswijk on 26 August 1857.

Berendina Dunnewold was born in Winterswijk on 9 October 1834 as a daughter of Gerrit Jan Dunnewold and Diela Rueselink. Hendrik Jan and Berendina had the following children:

The Debbink family knew several people who had emigrated in the 1840s. Berendina’s older brother Jan Willem Dunnewold had emigrated in 1846, when she was just 12 years old. While living in the United States he became a minister and settled in Sheboygan County, WI. Hendrik Jan had some Mentink cousins who had settled in the same area.

These family members must have sent favorable reports because on 10 July 1877, the family left the Netherlands from the port of Rotterdam. They sailed on the vessel ‘Scholten’ and arrived in New York City on 24 July 1877. From there, they went on to Wisconsin where they arrived three days later.

The family first rented a farm near Gibbsville. Soon afterwards, they purchased 20 acres of land near Sheboygan Falls and established a new farm. This farm was located just south of the hamlet known as ‘Ourtown’. 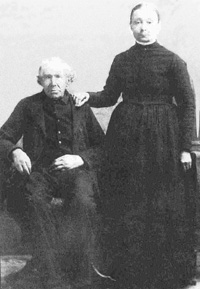 The family attended the Gibbsville Reformed church, where Berendina’s brother was the minister. Hendrik Jan and Berendina were active in the church as well.

Hendrik Jan Debbink died on 15 November 1896 at the age of 88. His wife survived him for almost 20 years and died on 22 December 1914. They are burried at Gibbsville Cemetery, Town of Lima, Sheboygan County, WI.