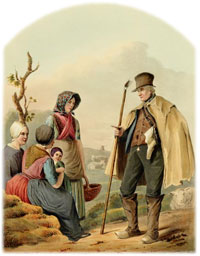 Drenthe is a province in the north-east of the Netherlands. It borders on the province of Groningen in the North, Germany in the east, Overijssel in the south and Friesland in the west.

The capital city of Drenthe is Assen. Other large towns are:

Before 1811, and for some time after 1811 as well, most people in Drenthe used patronymics instead of or in additional to last names. This can make it harder to trace your ancestors.

Although Drenthe was the least populated province, it ranked forth when comparing number of emigrants. In the nineteenth century, many people in Drenthe worked in the agricultural sector which means this province was struck particularly hard when the crops failed. Also, many people in Drenthe joined the Secession and were among the first to emigrate.

Most Drenthe emigrants settled in Holland and Grand Rapids in Michigan, and Orange City and Pella in Iowa.

Drenthe has always been one of the least populated parts of the Netherlands. The reason for this is the natural circumstances. Especially in earlier years, Drenthe was covered by swamps, bogs and heath fields.

In the nineteenth century, the Dutch government decided to use Drenthe as a place to put ‘unwanted elements’ of society. Beggars and vagabonds, but also orphans that could not be placed, were transported to Drenthe to live in colonies. They were to till the land. This way, people all over the Netherlands ended up in Drenthe.

The largest archive in Drenthe is the Drents Archief. The Drents Archief keeps the records of the province of Drenthe (which includes the court records and provincial government records), and for the municipality of Assen. Other municipalities keep their records in local or regional archives. For an overview of all the archives in Drenthe and their finding aids, see Drents Archiefnet.

Online resources for images about Drenthe:

Filed Under: Geography Tagged With: Drenthe