Evert Jan DUENK and Willemina RENSINK emigrated from Aalten to Sheboygan, WI. Later in life, they did not get along, as can be seen from an advertisement in the Dutch newspaper Nieuwsbode. 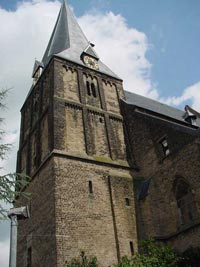 He was married in Aalten on 12 July 1818 to Joanna Bernardina te WINKEL, born
in Bocholt in Germany around 1790, daughter of Joan Gerhard te WINKEL and Theodora te BEESTE.

From the first marriage:

From the second marriage:

On 16 August 1847, the family left their farm in the hamlet of IJzerlo near Aalten to emigrate to the United States. Strangely enough, their new daughter-in-law Johanna Christina Hibbelink, whom son Derk Jan married only three weeks before they emigrated, is not mentioned in the Aalten emigration lists but we must assume she went with them. All the remaining children of Evert Jan, from both his marriages, went with them to the United States. The family settled in the Sheboygan area.

Somewhere along, Evert Jan and Willemina ceased to get along. The reason we know this is because on 3 March 1860, Evert Jan places an advertisement in the Dutch newspaper in North-America, the Nieuwsbode.

Translation:
Because Willemina Duenk, my housewife, has behaved in such a manner, that I can no longer live with her in peace, I forbid everyone to give her board on my account, because I will not be held liable for any debts incurred by her after today.
Gibbsville, 3 March 1860. E.J. Duenk.