Jan Willem Einink and Gesina Johanna te Brinke were born in Winterswijk. Together with their family, they emigrated to the United States. At the end of his life, Jan Willem Einink wrote an autobiography that gives us a unique view of his life and his struggles with the church, which led him to secede on more than one occasion. This article is largely written based on the information from his autobiography.

When Jan Willem Einink was about ten or eleven years old, his teacher told him that he had a lot of ability and should consider becoming a clerk in a store or a teacher. J.W. decided that he would like very much to become a teacher and his father agreed to help him as much as he could to attain that goal, but when J.W. was twelve years old his father died.

His mother sold the farm and went to live with her oldest son, Berend Hendrik, and his family. J.W. asked an uncle to teach him to make wooden shoes and the uncle agreed to do so, however, the uncle decided to have J.W.’s brother Hendrik Jan instead because he was three years older and stronger. J.W. was placed with another uncle, one who owned a linen bleachery business, and J.W. worked there. Later, he learned how to weave and he became a denim weaver.

When J.W. had reached his late teens he had begun to question the teachings and actions of the church in which he was raised, the Dutch Reformed Church. He felt that leaders of that church were too lax and had strayed too far from the Calvinist teaching.

After much soul-searching, questioning, reading and observing, J.W. and Gesina felt that there was no hope of improving that church and they must join with the Christelijk Afgescheidene Gemeente, or Seceders, whom they had come more and more to respect. When they confided this decision to Gesina Johanna’s parents, who loved the Dutch Reformed Church and saw nothing wrong with it, they were told that if they went though with that decision they would have to leave their home as they would not have such people in their home.

Shortly before their first child was born, J.W. and Gesina Johanna knew that they could not in good conscience have their child baptized in the Dutch Reformed Church and they would not be allowed to have it baptized in the Seceders church if they were not members. So they joined the Seceders and were told by Gesina Johanna’s parents that now they must leave their home. J.W. was soon elected to serve as a very young elder of that church.

For a time, the young couple lived with J.W.’s brother Berend Hendrik and his family, but eventually found a home of their own. During all this time they longed for reconciliation with her parents. When Gesina Johanna’s mother died in 1854 without any reconciliation having been made and with no encouraging signs from Gesina Johanna’s father, she and J.W. began to give serious thought to moving to America, where there were better chances for economic improvement. In the summer of 1858, they and their children, along with J.W.’s brother Hendrik Jan and his family, left Winterswijk.

On their last night in Winterswijk, the entire extended family stayed with Berend Hendrik. There was much talking and much weeping as this was the last time that they would all see each other. The next day, Berend Hendrik accompanied them to Rotterdam, where they boarded a canal boat that would take them to the ship on which they would cross the Atlantic. 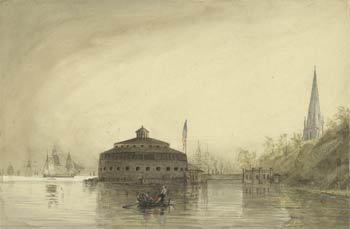 After a mostly uneventful voyage of forty-two days, they reached New York City. After a day’s delay in New York, they went by boat up the Hudson River to Albany and, at one o’clock in the night, transferred to a train which took them to Dunkirk, NY. From Dunkirk, they took another train to Westfield, NY. They hired a wagon to take them the rest of the way to Clymer, NY.

In Clymer they were welcomed by earlier immigrants who all helped him and Hendrik Jan build log cabins on two small adjoining farms which they had bought. Both became farmers who worked for Yankee farmers in the area (the Dutch called all non-Dutch people Yankees) and in any spare time worked to clear their own land of trees. After a time, both J.W. and H.J. felt that they needed larger farms. J.W. sold his land to H.J. and moved to a larger farm just down the road.

J.W. spent most of his life searching for the perfect congregation of believers. He was elected to serve as an elder in the Clymer Hill Church soon after coming to Clymer.

He and his family were members of that church until 1877, when they transferred to the Reformed Church in the village of Clymer, either because they wanted to be under the leadership of the pastor there or, more likely, because they were dissatisfied with some practice in the hill church. Again, J.W. was promptly elected to serve as an elder.

In 1883 he again seceded from the Dutch Reformed Church, this time the one in Clymer. This time it was over the issue of Free Masons, whom J.W. considered to be agents of the Devil. He was very unhappy because the Dutch Reformed Church did not take a stand in opposition to them. He led seventeen other seceders in forming a Christian Reformed Church in Clymer. They continued only a few years and then, as J.W. said, "On account of enmity from outsiders, disloyalty and return to the Reformed Church, deaths in the congregation and also being far distant from sister congregations, we felt obliged to disband."

Meanwhile, J.W. and Gesina Johanna’s youngest son, Berend Hendrik, had become a minister in the Christian Reformed Church and had served as minister of a congregation in Michigan. In 1896 he was serving a pastorate in Lafayette, Indiana. At his urging and that of two others of their children, J.W. and Gesina Johanna moved to Lafayette. One son and one daughter, with their families also moved to Lafayette.

On the day after their first Sunday in Lafayette, Gesina Johanna wrote in her daybook, "Oh, how grateful we felt to the Lord yesterday, that we were again in the midst of God’s people and under the preaching of the Gospel, by our own son and brother." The Eininks had finally reached their Promised Land.