Hendrik Jan Esselinkpas was one of the survivors of the Phoenix disaster. He later settled in Michigan. His son corresponded about his father’s memories of the disaster with William O. Van Eyck.

Hendrik Jan Esselinkpas was born in Winterswijk on 22 December 1813 as the son of Salomon Esselinkpas and Janna Geertruid Lammers. He worked as a wheelmaker and farmer.

The Esselinkpas family joined the Afgescheiden movement. Hendrik Jan became a member of this church on 14 September 1841.

When his brother Jan Berend decided to emigrate together with his family, Hendrik Jan decided to join them. The family left the Netherlands in 1847.

They Phoenix took them across the Great Lakes, but perished a few miles off Sheboygan. Hendrik Jan was the only survivor of this family. In 1922, his son Samuel write to William O. Van Eyck, who was investigating the disaster.

All that come to my mind that my Father told me was that he was awakened by the cry of fire. A party near him on the boat told him that his wooden shoes were schorched, were they otherwise were simply warm. He went out and was looking for a bucket to help put out the fire. When he saw that the life boats were left down, for a moment he thought and it entered his mind it was life or death and cathching hold of one of the ropes the life boat was left down with, he slid down and was lucky to land in one of the life boats. My Father had a brother who had wife + children. His brother died a few days before and was slid down the gang plank into the ocean. One of those of my father’s brother’s boys was with him at the time on the Phoenix, but went back after some of his belonings and the whole family wiped out. No sooner was he in the boat but one of the crew pushed away from the burning boat while others were still jumping for the boat which was loaded to the brim and made for shore.

While on the boat father well remembered the manager to say as he looked back to all Dutch men. Father’s belongings were all left behind save one shirt 2 pr trouwes + 2 pr sock he happened to have on. When they reached shore the ground was frozen + some were without clothes, he gave one pr of trouwers + pr of sock to one that was minus them.

This happened he said 7 miles from Sheboygan. He said there were 2 life boats the other one came near dipping water but it was a nice still morning. Father staid in Sheboygan that winter cutting cord wood with buck saw + other little jobs for his board.

After the Phoenix disaster, Hendrik Jan decided to cross the Lake again and settled in Holland, MI. He married Dirkje Westerlaken on 26 October 1851, but she died soon.

On 30 October 1853, Hendrik Jan was married to Gerritje Damkot by the famous minister Albert van Raalte. Like her husband, Gerritje was a native of Winterswijk. She was born there on 9 September 1824 as a daughter of Jan Hindrik Damkot and Janna Geertruid Rotmans. Gerritje went the United States early in 1847. She first served with an aristocratic family in New York that changed her hard to pronounce name into ‘Harriet’, a name she would keep the rest of her life. 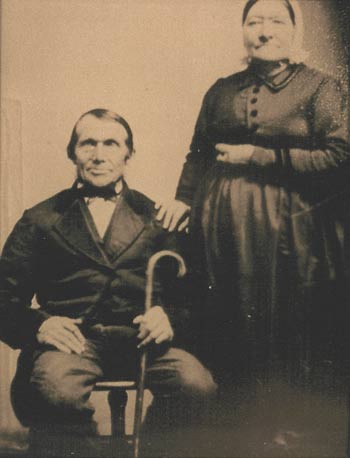 When Gerritje Damkot married Hendrik Jan, she was already a widow of Hendrik Jan Kooijers, with whom she had at least two children: Gezina Kooijers b. 16 January 1849 and Jon Kooijers, b. 14 January 1852.

Together, Hendrik Jan and Gerritje had a son, Samuel, who was born in Holland, MI on 22 May 1861. The family lived on a farm near Holland, MI until old age. The long name Esselinkpas was shortened to Pas.

Gerritje had lost her half-sister Berendina and Berendina’s husband Teunis Koffers and three of their children during the Phoenix disaster. In his letter to William O. Van Eyck, her son Samuel writes about them as well.

My mother had a sister married to Koffers (parents of GJ + Tobias Koffers (deseased)) who was to go with this boat also and my mother had not heard from them. How great was her surprise later when her nephews surprized her. They had gone on a boat on ahead to escape serving as soldiers. For quite a while it was not known to them who were living or dead.

Hendrik Jan and Gerritje are burried on the southern cemetery in Holland, MI. Near the main road is a small plot with a stone that reads "Father, H.J.E. Pas, 1813-1901" and another "Mother, Harriet, wife of H.J.E. Pas, 1824-1900". These modest stones mark the last restingplace of Hendrik Jan Esselinkpas, the only Phoenix survivor to settle in Michigan.