Gerrit Geerlings was a member of the Secession in the Netherlands and involved in the creation of many new Seceder churches. He emigrated to the United States together with his entire family of seven children. Unfortunately, they ended up on the vessel Phoenix which took them across the Great Lakes but perished off the shores of Sheboygan. The Geerlings family was one of the luckiest (or should we say, "least unlucky") families on board, because only two of the children were lost while most other families had perished entirely.

Gerrit Geerlings was baptized in Meppel, province of Drenthe, January 1, 1802 as a son of Albert Geerlings and Henderkje Kuijers. His father died February 22, 1813, after which his mother remarried Hendrik Driessen. In 1821 he was drafted for the military, but he found himself a substitute. At this time, he was a shoemaker. On June 23, 1825 he married Aaltjen de Vries in Zwolle. She was born December 13, 1804 as a daughter of Willem de Vries and Henderkien van Eelen. At the time of their marriage, Gerrit Geerlings was a miller and Aaltjen’s father was a ship-carpenter. Soon after their marriage the family settled in the Gelderland town of Hattem. Here, their first eleven children were born. Unfortunately, six of them died in their infancy. 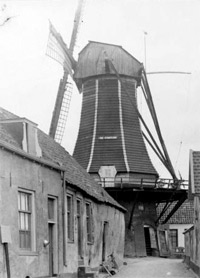 In Hattem, Gerrit Geerlings worked on the mill ‘De Fortuin’, ‘the fortune’. Ever since the Middle Ages there had been a wind-wheat-mill on that location. In the Middle Ages a wheat-mill was of vital importance to a town and the northwest corner of the town was the best place to catch wind. The Fortuin was a so-called standardmill. This was the first type of windmill that was used for the grinding of wheat in the Netherlands.

This standardmill was blown over by a storm in May, 1808. Eight years later, in 1816, the six-sided windmill with two pairs of grindstones was built, which we still can see today. The builder was Gerrit Jan Rankenberg from Zalk. In 1825, he sold the mill for Fl. 19.000,- to Gerrit Geerlings and his new father-in-law, Willem de Vries. They named the mill ‘De Fortuin’.

Besides his work as a miller, Gerrit Geerlings also became a deacon of the Reformed Church of Hattem. When the minister of Hattem, Anthony Brummelkamp, joined the Secession, Gerrit Geerlings was the only member of the church council who followed him. Gerrit Geerlings continued to be a deacon for the Seceders. On September 5, 1839 he asks the seceded church council to be excused from his duties since elder Jan Visser has the same profession as Gerrit (miller) which could cause problems. Why this would cause problems is not known. Also, his wife, who is not a Seceder, had been hostile towards the movement. The church council finds Geerlings’ complaints not good enough, his request is denied as ‘coming from disbelief and despondency’. On April 13, 1840 the problem is laid before the classical church meeting. The deacon complains he has never been formally instated as a deacon of the Secessionist church and his appointment as deacon of the Hervormd Church was only for three years. The classical board is of the opinion that Geerlings can either be fired or resign himself. On April 21, 1840 the church council follows this advice.

Perhaps prompted by this conflict, the family moved to Apeldoorn in 1841 or 1842. In 1842 they sold the mill for 15.000,- to Klaas Roos, which sold it in 1848 to Lubbert Lubberts for f3.000,-. The mill apparently degraded rapidly, which is not only obvious from the devaluation. In 1852 Lubberts was summoned by the municipality to repair the mill because of the dangers it provided for the surroundings.

In Apeldoorn Gerrit Geerlings and his wife worked as bakers. Here, two daughters were born in 1842 and 1844. In 1843 they appeared before the public notary to acknowledge a debt of two thousand Dutch guilders to Sir Johannes Kerkhoven, a member of the Provincial government of Gelderland. They agree on an interest rate of 4,5%. Also, the money can be repaid if either one of the parties tells it the other party six months in advance. In case they don’t make the payments, they have to have some collateral. This is a nice source of information about the properties of the Geerlings family. As collateral, they put up the house in which they live and which they bought on the sixth of January 1842 according to an extract of a certificate before the public notary in Hattem. Next, they put up the right of ground rent of a yard and garden. All the properties lie in the northern part of Apeldoorn. For a debt of two thousand guilders, this still isn’t enough collateral. They also put up their house with yard and garden at the corner of the ‘Achterstraat’ in Hattem near the ‘Dorppoort’ (village gate), which they bought February 18, 1828. If Gerrit and Aaltjen don’t meet their payments, Mr. Kerkhoven can sell the properties to get his money back. 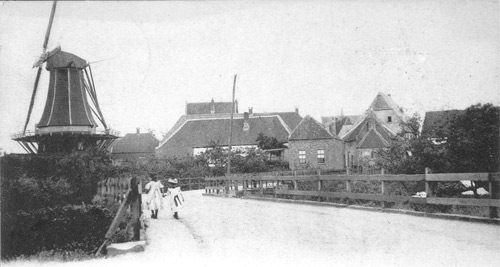 Between 1844 and 1847, the Geerlings family moved to Enter. The reason for this is not known, perhaps because Gerrit could become a miller again. Gerrit and Aaltien had their last (fourteenth!) child in Enter. The baby was called Alberta and was born on the second of June in 1847. She died twelve days later.

Of the fourteen children the family had had, only seven were alive when the family emigrated in 1847. They emigration took place only a few weeks after the birth and death of baby Alberta. Whether Gerrit Geerlings belonged to the Seceded Community in Enter is not known. He did emigrate together with his neighbors, Lubbers and Hommers, who were prominent members of the Seceder church in Enter.

The oldest son of Gerrit Geerlings and Aaltien de Vries, Albert, left earlier to avoid being drafted for the military. The rest of the family emigrated together: father Gerrit (44), mother Aaltien (42), their sons Willem (16), Hendrik Jan (9) and Jacob (8) and daughters Hendrikje (14), Aaltje (4) and Gerritje (3).

Unfortunately, the family took the Phoenix to take them across the Great Lakes. When this ship burnt, two of their children did not survive. Even so, the Geerlings family was one of the most fortunate families aboard the Phoenix because six people survived while in total, only 24 of the 200+ passengers survived.

One ‘myth’ about the Phoenix disaster that first surfaced around 1897 is that their daughter Hendrikje died because she went back to get her baby sister Alberta a blanket. As the story goes, Hendrikje died in the flames, while baby Alberta survived. However, as can be found in the civil registration of Wierden, ‘baby Alberta’ was dead months before the family ever left Wierden! Since she was born in June, no other baby could have been born after Alberta and be on the Phoenix. Hendrikje did die however, so perhaps she did go back for a blanket, although not for Alberta. Her brother Wilem died as well.

This is also confirmed in a letter from John Geerlings, son of Albert, to William O. van Eyck dated Nov. 16, 1922. He writes: ‘My grandfather, Garrett Geerlings, his wife Gerrettje and their three sons, William, John and Jacob and their three daughters, Gerrettje, Altje and Wilhemina were on the boat when it left Buffalo. All were saved except one son, William and one daugther, Wilhemina.’ Although he mistakes ‘Hendrikje’ for ‘Willemina’, his story makes it clear that Albert Geerlings, the father of the writer, and baby Alberta were not on board the ship.

One other myth about the Phoenix disaster is that the crew was after the money of the passengers. The Geerlings family was supposed to carry $50,000 in gold. Although they posessed houses in Hattem and Apeldoorn, there is no indication they were that rich. After all, they had to sell the mill, and had to borrow a lot of money from other people. That doesn’t sound like people who would have $50,000 in gold.

Life in the United States

After the disaster, the family moved to Milwaukee. In 1850 they lived there in ward 2. Gerrit took up his old profession and became a shoemaker again. In Milwaukee they joined the First Reformed Church. Gerrit Geerlings, his wife and children Hendrik Jan, Jacob, Aaltjen and Gertjen are listed as members of this church in 1856. In the membership list it is mentioned they left Milwaukee in 1859. In 1860, they lived in Milwaukee again, ward 9. Their daughter Aaltjen was married to William Tellier at the time, who was a prominent business man. In 1870 Gerrit worked as a shoemaker, probably for his son Jacob. Son Albert worked for the railroad company.

Gerritje Geerlings led a singularly eventful life. She was about three and a half years old at the time of the Phoenix tragedy, and afterwards said all she remembered of the disaster was that she saw a great light in the boat, and that her fifteen year old sister Hendrikje, who was herself lost, had lifted her into the life-boat.

Having lost all their earthly belongings, Gerritje who was rather a pretty child was taken by an American family where she staid for several years. Having no children of their own, this American family, very wealthy, loved the girl whom they called Ida, but the parents refused to give her up. The American family wanted to set-tie in California, and offered a large sum of money for Ida. When this failed, the American lady requested Gerritje’s (Ida’s) mother to call on her at her room in the hotel where they were staying, and to bring Ida with her. When Ida and her mother arrived at the hotel, the lady took Ida to her room, changed her clothes, took her to a carriage standing ready near the window, and left to take a boat for some place in Michigan, whence they intended to go to California. The mother alarmed at the long delay of Ida’s return, went upstairs and found the room locked. The door was broken open by the authorities, and the room found vacant. However, the lady was intercepted in time arid forced to give up the girl. Ida only remembered later on that she was brought home in charge of the constable. The lady returned to her home in Marshall, Michigan, brokenhearted.

In 1864 Gerritje married Berend van der Las from Eibergen, a minister of the Seceded Community. In 1874 this family moved to Holland, Iowa. They had nine children together.