How soon after birth were children baptized?

In response to the article about the word dopen (baptisms), Tore Langholm asked:

Has “baptism” always/usually been equivalent to “infant baptism” in the Netherlands?

I just found a record of a baptism in the Nederlandse Hervormde Kerk in July of 1698, and wonder if I can assume that this is also the childs’ birth year? 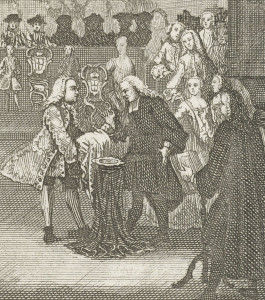 The baptism of William V of Orange, 1748. Image credits: Rijksmuseum

Most children were baptized within days of being born, so the baptism date is a good approximation of the birth date. Before 1811, it is often the earliest record you will find and there will be no record that states the actual birth date.

Not all religions baptized their children as infants. The Doopsgezinden (Anabaptists) believed that people should consciously choose to become a part of the church. In that church, people are only baptized when they are adults, usually around the age of 18.

[edit: added information about regional differences based on the comments]