Hendrikus Lubbers and his family joined the Seceded community in Enter, Overijssel. They were one of many Seceders who emigrated from the Netherlands in 1847. Hendrikus was planning to study to be a minister. However, another fate awaited him across the ocean. The entire family perished on Lake Michigan when their vessel, the Phoenix, caught on fire.

On January 30, 1840 the 33-year-old shoemaker Hendrikus Lubbers was married to 39-year-old Marijken Lubbers, a shopkeeper. Hendrikus Lubbers was born in Enter on September 17, 1806. His parents, Jan Anthonissen Lubbers and Hendrika de Wilde, had him baptized four days later in the Dutch Reformed Church of Wierden, to which Enter belonged.

Marijke Lubbers was born the second of January 1801 in Enter and baptized in Wierden two days later. She was the fourth of six children of Lucas Lubbertsen and Leida Kattelaar. Hendrikus and Marijke had two children, Hein (born May 18, 1841) and Lucas (born January 31, 1843).

Enter, in the province of Overijssel, is situated 4,5 miles south of Wierden. Around 1840, it was a small village with 1,100 inhabitants. Many people earned a living carrying freights on ships or making wooden shoes. 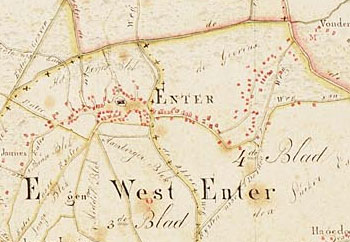 In Enter, like many places in the east of the Netherlands, people started holding ceremonies outside the Reformed Church. When the actual Secession took place is not known. The council notes of the Seceded Community of Enter start April 10, 1840. During the meeting K. Wildeboer, the minister of nearby Rijssen was present. Hendrikus Lubbers and Johannes Kempers were eldermen.

The notes of the meetings were kept irregularly. The next writing is dated April 1, 1841. The eldermen H. Lubbers and J. Kempers were present, besides A. Evers, H.M. Poorte, J.H. Roohaan, H. Geels and ‘the women of the community’. They discussed the necessity to have a minister for their community. This was easier said than done. In those days, the number of seceded ministers was very small. The few ministers that were available already were confirmed by a community and made many field-trips to preach for communities without their own minister.

In the classis of Ommen, to which Enter belonged, it was considered inappropriate to ask for a minister of another community. For the community of Enter this meant the only alternative was to select one of their own to be educated as a minister. The same had happened in Den Ham, where Seine Bolks was now the minister. The Enter community chose elderman Hendrikus Lubbers, who was to get his education from Rev. Van Raalte in Ommen. However, he never became a minister.

In 1847, the designated minister Hendrikus Lubbers and his family emigrated from Enter. His farm was bought by the Seceded Community to be rebuilt as a church.

They crossed the ocean on the vessel France, in a group that consisted almost entirely of Seceders. Among them were two other families from Enter/Wierden: Hommers and Geerlings.

Upon arrival in New York, they proceeded through the Erie Canal towards Buffalo. Here they boarded the vessel Phoenix which was supposed to take them across the Great Lakes. Unfortunately, the Phoenix perished off the coast of Sheboygan. Hendrikus Lubbers, his wife Marijke and their two sons Hein and Lucas were lost in the fire.

Filed Under: Stories Tagged With: Sheboygan