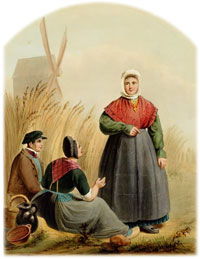 The capital city of Overijssel is Zwolle. The largest towns are:

In the late 18th century, Overijssel became famous for its textiles. English industrialists came to Overijssel and brought new technologies with them. The eastern part of the province, Twente, became an important production center for textiles. This continued well into the 20th century when Enschede and the neighboring German region were attracting many new laborers.

In terms of naming traditions, Overijssel is split into two parts. The eastern part, Twente, used the system of farm names before the introduction of the civil registration. The western part, consisting of Salland and Vollenhove, used patronymics mostly although a clear line cannot be drawn between the regions.

People from Overijssel have always migrated across the border into Germany. In the middle of the nineteenth century, many members of the Afgescheiden (Secession) church followed Albertus van Raalte and Anthony Brummelkamp’s advise to emigrate to the United States. Most of them ended up in Michigan. Another emigration wave followed at the end of the nineteenth century. The Overijssel Historical Center has compiled a database of Overijssel emigrants that is available via Archieven.nl.

Other municipalities in Overijssel keep their records in local or regional archives.

Filed Under: Geography Tagged With: Overijssel