Hermanus Piek and Johanna Catharina Bekerink emigrated to the United States together with their three children. They settled in Clymer, NY.

Hermanus Piek was born in Bredevoort, a small town near the German border in the eastern part of Gelderland, on 29 November 1805. He was the sixth son in a row of Jan Derk Piek and Hendrika Zwietink. After him, a younger sister was born.

On 20 March 1839, he married Johanna Catharina Bekerink. She was born in Winterswijk on 1 December 1814. She was a daughter of Abraham Bekerink and Frederika Schreurs.

He worked as a transporter, carrying goods for a fee. On 6 Mey 1842, one of his competitors, Bernardus Willemsen, filed a legal complaint against him for slander. On 22 July 1842, he was acquitted from all charges by the court.

Lives in the United States

Hermanus and Johanna Catharina remained in Clymer for the rest of their lives. On 29 December 1864, their daughter Johanna Frederika was married to Derk Jan Schreurs, son of Jan Hendrik Schreurs and Janna Geertruid Oonk.

Johanna Catharina passed away on 28 December 1886. Six months later, Hermanus died on 12 May 1887. They are burried side-by-side on Clymer Hill Cemetery. 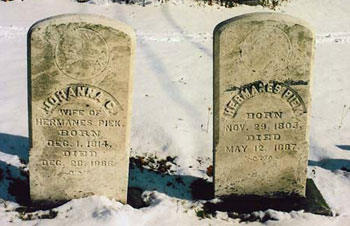