Jan Hendrik Schreurs and Janna Geertruid Oonk came from Winterswijk and emigrated to the United States in 1846. In 1898, their descendants held a reunion. On this occasion, a short account of their lives written by their son John William, was published. Because this account gives much background information on the reasons why people emigrated, the entire account is copied here. For the sake of legibility, headings have been added (no headings were present in the original account).

A bit of Family history. 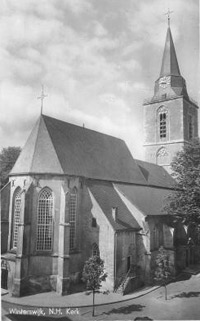 Father, John Henry Schruers, was born in Guelderland province, Holland, November 27, 1812. He was one of ten children, and was the oldest boy; two sisters were older than he. Through devastating wars Holland was heavily burdened with taxes, and Father’s parents, always poor, were, like all the rest of the humble class, able to secure only the barest necessaries of life for themselves and their children. Father was the only one of the family who ever came to America. About his parents I know definitely very little.

Mother, whose maiden name was Jana Gertrude Oonk, was born in Guelderland province, Holland, November 12, 1813. She was the oldest of four children. The names of her sisters, in the order of age, were Jana Gertrude, Hermina, Marya, and Berdena. Berdena only is now alive, residing in Muscatine, Ia. All four sisters came to America, and reared good families. Mother’s father married a second time, after the death of his first wife, and had two other children thata I know of – one a boy, after whom I was named. The daughter died in Holland; her four children – I believe that was the number – came to America.

Mother received a good education, and her girlhood was probably pleasanter than was Father’s boyhood; for during her younger years Grandfather Oonk was a well-to-do manufacturer of wagon-wheels. Later in life he became involved financially through signing obligations for friends in whom he placed too much confidence, and lost much of his property. But to the end of his life he was in comfortable circumstances, and when he died he left a small amount of money, which was divided among his heirs. At the time of his death Mother was in America, and I think she gave her share of this money to less fortunate members of the family still in Holland.

Mother and Father were married August 1, 1840, in Holland. So tax-ridden was the land at this time, and such was the general industrial depression, that it required the hardest labor and most rigid economy for the working class to gain a livelihood. I have often heard Father and Mother tell how the laboring people were obliged to live on sour milk, coarse rye bread, and vegetables, with a small piece of meat once or twice a week, and how oftentimes even this inferior fare was lacking, and children were put to bed hungry. I personally know of parents who placed bands about the stomachs of their children, to prevent them from overeating!

It was while such conditions as these prevailed that Father and Mother learned of the greater opportunities and privileges that were to be gained in America, and they began to consider how they might reach this land of promise across the sea, where they would be able to overcome poverty, where their children might have advantages that had been denied to themselves. They talked and planned and worked, till finally their hopes were realized, and they were ready to embark for America. In but a small measure can we understand how great were the sacrifices they made; what it meant to them to say good-by to parents, friends, and native land; to leave forever all the old associations, which they loved despite the hardships they had undergone, and go to a foreign shore, among strange people, who spoke an unfamiliar language. But they had counted the cost and were determined to go. Father had made a transaction in timber in which he seemed to have received special providential favor. From this he realized a sum which, added to the little he and Mother had already scraped together, was sufficient to give them passage to the United States.

The farewells were spoken, and they, with the two children then born – John Derk and Jana Gertrude – boarded the sailing vessel that was to bear them across the ocean. Their voyage was attended with none of the comforts and pleasures that mark a trip on the modern quick-sailing passenger-steamships – fitly styled ocean greyhounds. Theirs was a tedious passage, full of discomfort, and even danger; for no steam-engine propelled the ship and set sea-calms at naught, nor had naval architecture yet designed a vessel that might laugh at the tempest.

Their ship left Amsterdam October 27, 1846. It reached New York January 8, 1847 – seventy-two days in making a passage that now ordinarily takes about a week. Still, relatively speaking, this was not an unusually long time; I know of another family who were on the water one hundred and fifty days making the same trip. 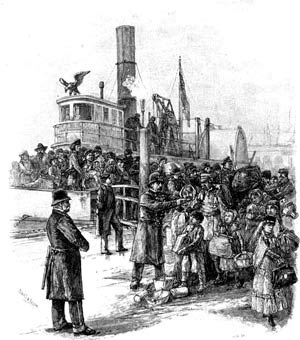 When they at last found themselves at Castle Garden, New York, they had less than three dollars in money, and could not speak or understand one word of English. But the Father of All, in whom they placed implicit faith, watched over and guided them. At this trying time Mother in particular found strength and courage in the divine assurances, "I will never fail thee nor forsake thee" and "Though thou crosseth through deep waters, they shall not overcome thee".

When they left their home in Holland it was with the definite design of joining a Dutch settlement in Clymer, Chautauqua county, N.Y., where they might worship God after the manner of their own religious sect; for at Clymer a Dutch Reform church had been organized. This purpose they never lost sight of.

With the aid of an interpreter Father secured some kind of work at low wages. They practiced the strictest economy, and after about a year in New York (or Staten Island), they had saved enough to get them to Albany. Here Father found employment again – this time in a slaughterhouse. Here he worked for a year or more, during which time another baby, Garret William, was born. Next he obtained a place as a farm hand with a man named Elson, in West Milton township, Saratoga county. After a time he rented a farm from Mr. Elson; he was very successful in its management and accumulated a nice sum of money. The people in this section were principally English and Scotch, and Father and Mother, through constant association with English-speaking people, soon learned the language of their adopted country. Had there but been here a church of their own faith, they probably would have remained many years longer than they did; for the soil was highly productive and the markets good. Father often spoke of the pecuniary advantages he might have retained by staying here. But they never swerved from their original purpose, and in the spring of 1855 – over seven years from the date of their arrival in New York harbor – they made another forward move and reached the Dutch settlement at Clymer, where they were among people of their own nationality and relious belief. Two more boys had been born during the years spent in West Milton township – John William and John Henry.

At Clymer Father bought a farm of about sixty acres. With the exception of two or three acres, it was covered with heavy timber. A small house and barn were on the farm when he bought it. The work of chopping down the big trees and gathering them into heaps to be burned fell chiefly upon Father, for John Derk was the only one of the children strong enough to be of any assistance. The first years in Clymer were marked by very hard work and extreme frugality. No crops could be raised till the land was cleared, but there were plenty of big maples on the uncleared land, and Father kept a few cows, and for such household suppoies as they needed they bartered maple-sugar and butter. Year by year more land was brought under cultivation; markets for their produce opened to them; and as their earnings increased, their straitness lessened. 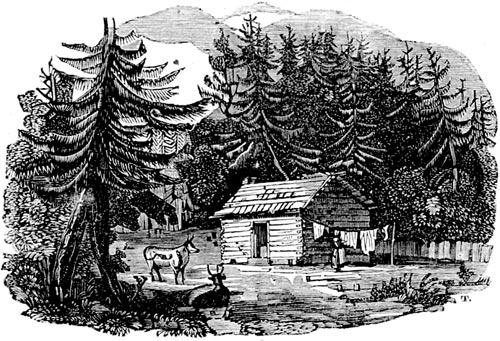 For many years Father and Mother received regular corresepondence from their old homes. I remember very little of what these letters contained, but I recall that they almost always made Mother cry.

Three decades have brought many changes: Nearly all the sixty acres of woodland has been converted into meadows and well-tilled fields. Comfort has supplanted privation.

The children, grown to manhood and womanhood, have left the farmhouse for homes of their own. The old homestead is very quiet; the shouts and merrymaking of young life are gone. Father and Mother are gray-haired now – "growing old beautifully". Their hands are ever ready to help us when our paths are rough; we are still their "children" – counseled, comforted, in times of perplexity or trouble. Loving and loved, they near the end of life’s day. 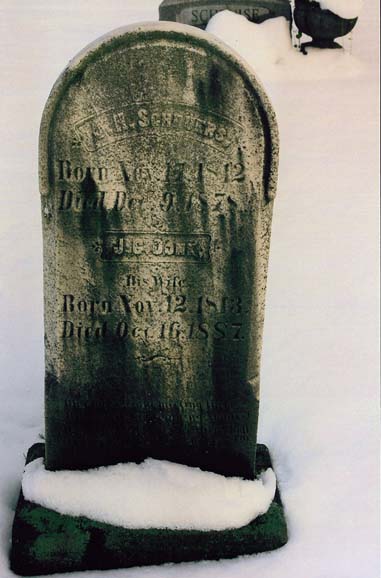