My distant cousin, Fred Geurkink, asked me the following question [edited for brevity]:

My grandma Gigi, (Marion Peterson), wrote down in her recollections about my great great grandma Grietje Koning. Said she was born on 30 Aug 1834, married my gg grandpa Jan Pieters Stelma on 23 Jun 1856, etc etc.

On Ancestry, I received “hints” about said Grietje Koning from other members, who also married Jan Pieters Stelma, but her birthday was different: July 29 1834. Could my grandma be wrong, or are the people on Ancestry wrong?

At Allegroningers I found the two Grietje Konings and researched their different set of parents. The one from July died ten months later. The one from August married a Jan Freerks on June 23 1856. Two dead ends.

Then I looked at Jan Stelmas parents, and his dad died a decade earlier, and his mother’s name is Elizabeth Freerks Borgman. I looked closer at the Marriage certificate, and sure enough, Grietje had both parents listed, and Jan only had his mother. Elizabeth Freerks! I believe, and correct me if I’m wrong. But I think Jan Pieters Stelma used His mothers Maiden name on the Huwelijksregister? Jan Freerks?

Thank you for the interesting puzzle, Fred. Your question shows your understanding of an important research principle: when in doubt, go back to the original sources, even to verify your own grandma’s words.

In terms of reliability, Ancestry is a mixed bag. Ancestry does not have many original records from the Netherlands. Most of the Dutch information comes from trees, whose compilers may have accepted hints without verifying that the hint was actually about their ancestor and not for some same-named person of similar age. The information you find in those trees needs to be verified using more reliable records.

AlleGroningers is a website by the Groninger Archives, the archives of the province and city of Groningen, that provides scans and indexes of the original birth, marriage and death records. Dutch civil registration records are very reliable since they were recorded during or shortly after the event, with eye witnesses as the informants. 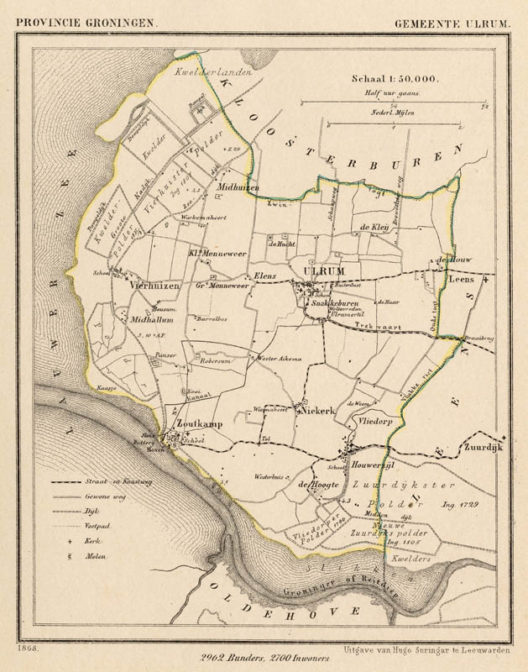 Let’s take a look at the marriage record of Grietje Konings and Jan Freers of 23 June 1859: 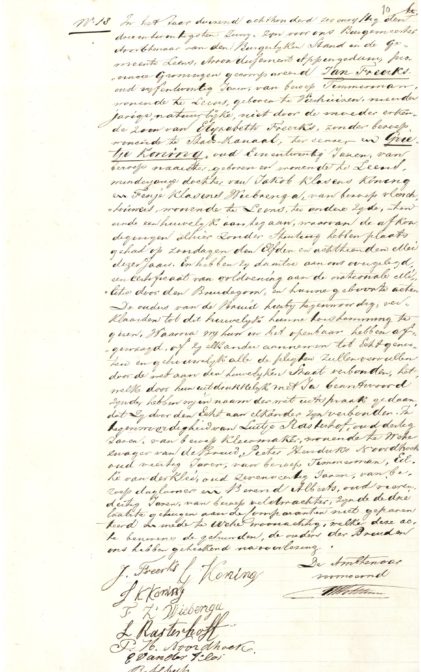 This record shows that the groom was born out of wedlock, which explains why he used his mother’s last name. Dutch records always use a woman’s maiden name, even after marriage, so Freerks was Elijzabeth’s maiden name.

A search for records with Jan Freerks and Eli* Freerks in AlleGroningers turned up his birth record: 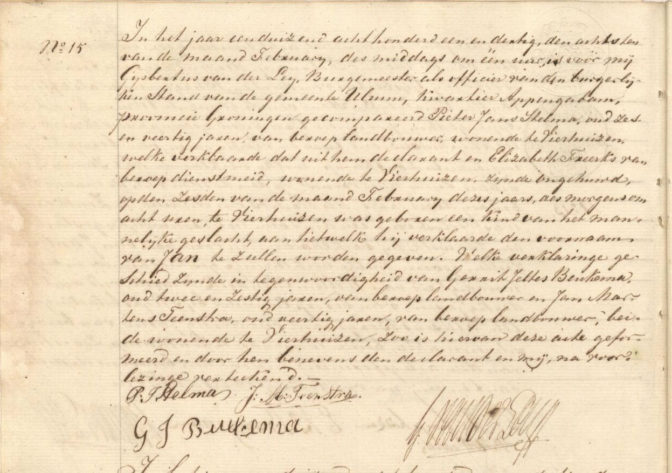 This record makes it clear that Jan was the son of Pieter Jans Stelma and Elizabeth Freerks, and that his parents were unmarried. By law, he would have been given his mother’s surname, Freerks.

The fact that his father registered his birth shows that he was openly admitting to being the father. Based on the information provided by Fred’s grandmother, it seems likely that Jan grew up calling himself by his father’s name and patronymic. But when it came to his marriage record, he had to use his official name. 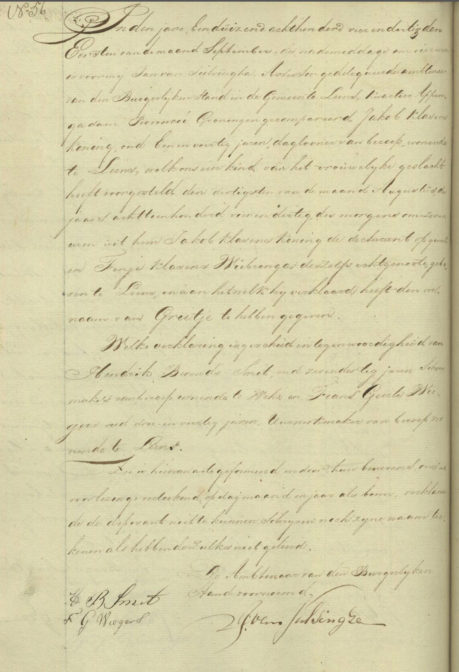 Jakob Klasens Koning, 41, day laborer, living in Leens, presented a female child born 30 August 1834 at 7 AM from him and his wife Fenje Klasens Wiebrenga, born in Leens, named Grietje.
Witnesses: Hendrik Berends Smit, 36, shoemaker in Wehe?, and Frans Geerts Wiegers, 43, clock maker in Leens.
The informant declares to be unable to write, as not having learned to do so.

The names of the child, parents and place of birth match the information from the marriage record. The birth date is consistent with Grietje’s age at the time of her marriage. This combination proves that this is the correct birth record of Fred’s great-great-grandmother.

The case of Grietje Koning shows us how to untangle two same-named women. Automatically generated hints can be misleading, as they will show anyone with the same name with roughly the same birth date. It is up to the researcher to verify the information by going back to the original records.

Dutch records are very reliable and informative. Marriage records identify both the spouses and their parents. By verifying the information in the original records, it was possible to prove the identity of Grietje Koning, the wife of Jan Freerks, also known as Jan Pieters Stelma.

Grandma was right after all.