While living in Aalten, the couple had the following children, all born in Aalten:

On 15 July 1879, the family emigrated with the remaining four children from their farm in the hamlet of Lintelo near Aalten. As reason for emigration it was listed ‘improvement of fate’. Their destination was listed as North-America.

Gerrit Jan, who was 9 at the time of the emigration, used to reminisce about their voyage. The family crossed the ocean as steerage (below deck) passengers to save money. Conditions on board were poor. Unfortunately, if the people on the upper decks were vomiting across the railing, it would come down on them. The sailors played with the young children. Also, their mother used to comb their hair with a fine comb to get the lice out of their hair. The children then stomped on them to kill them. Food was scarce and fought over. The Dutch families were used to praying before eating but when their eyes were closed, other people would try to grab their food. Each family was given a ration and there was a schedule so the women could prepare their food in turns. 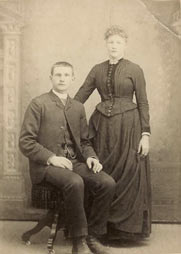 At the end of their journey, the family settled in the Town of Holland, Oostburg, WI with just $18 and bought a cow. Unfortunately, the living conditions in the new country weren’t that favorable either. At the age of 47, Johanna Hendrika died from consumption (tuberculosis) on 3 November 1887. She is burried in Union Cemetery.

Jan Willem was remarried to Dela Huinink (Delia Huenink), who was born in Aalten on 29 August 1835 as the daughter of Jan Berend Huinink and Berendina Heesen. She had emigrated in 1869, together with her extended family. See the article about her brother Derk Willem Huinink for more information. A picture of Jan Willem Wieberdink and Delia Huenink still exists. Jan Willem died on 1 March 1907. 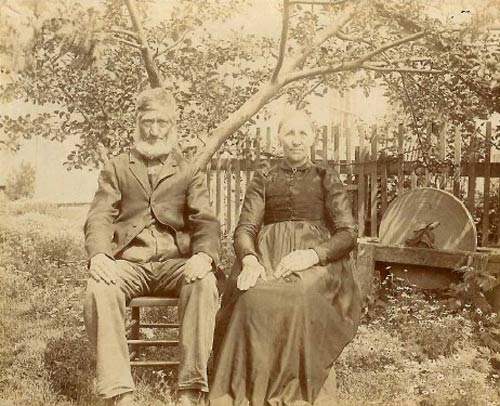