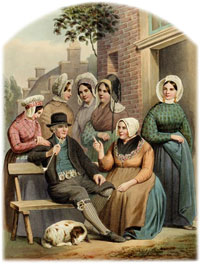 Zeeland is a province in the south-west of the Netherlands. It borders on Noord-Brabant in the east, the country of Belgium in the south, the North Sea in the west and Zuid-Holland in the north.

The capital of Zeeland is Middelburg. Other larger towns are:

Zeeland consists of several islands and a piece of mainland called Zeeuws-Vlaanderen. The names of the islands are:

Zeeuws-Vlaanderen is the southern-most part. It is attached to Belgium and has always had many Flemmish influences.

Genealogy in Zeeland is complicated by the fact that many of the records were destroyed during the bombing of Middelburg in World War II. The main problem is with the church records of the 17th and 18th century. For the 19th century, the situation is better. Two copies were kept of the civil registration records so one copy still exists.

For genealogical research in Zeeland before 1800, many towns lack the usual church records. Other sources that can be consulted instead are judicial records and government records such as the registration of orphans.

Because many of the islands used to be somewhat isolated, naming traditions can vary from region to region. Most people in Zeeland had fixed last names long before the introduction of the civil registration. In other parts, people used patronymics.

Another important factor to take into account when researching your Zeeland ancestors is that Zeeland has over the centuries received many people from other regions. In the 17th and 18th century, many French protestants (Huguenots) settled in the region. Most of them settled in Zeeuws-Vlaanderen or Middelburg. From there, several moved on to cities like Leiden (Zuid-Holland) and Amsterdam (Noord-Holland), or settled in New Netherland (New York).

In short, if your ancestors were emigrants from Zeeland, chances are that they had emigrant ancestors as well.

Many Zeeland records are kept by the Zeeuws Archief. Many of the records of the civil registration can be found in WieWasWie or in the Zeeuwen gezocht (Searching for Zeelanders) of the Zeeuws archief. Church records are available at Familysearch.org.

Zeeland is probably the province from where the most people emigrated in the 19th century. Many members of the seceder churches emigrated in the 1840’s. They followed rev. Cornelis van der Meulen to the newly founded colony of Holland, MI.

Even more people emigrated at the end of the 19th century. Thousands of people from Zeeland left to find a new home. Many people from Zeeuws-Vlaanderen settled in the areas around the Great Lakes like Michigan and Wisconsin. Other people settled in New York state.

Lists of emigrants can be found online in the Zeeuwen gezocht database of the Zeeuws Archief.

Images of Zeeland can be found in several online resources:

Filed Under: Geography Tagged With: Zeeland