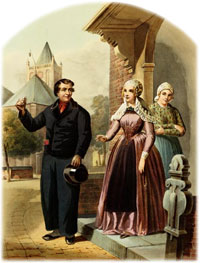 The capital city of Zuid-Holland is The Hague (In Dutch Den Haag or ‘s-Gravenhage). Other large towns are:

Most people in Zuid-Holland were using fixed surnames long before the civil registration made this mandatory. Some regions used patronymics in addition to the surname.

A growing number of birth, marriage and death records from the civil registration of Zuid-Holland can be found in WieWasWie. The records for Rotterdam and former municipalities that now belong to Rotterdam can be found on the Rotterdam digital family tree website.

Because Zuid-Holland has always been one of the more prosperous parts of the Netherlands, it was not a region from where an extraordinary number of people emigrated during the big emigration waves. Many merchants and entrepreneurs did emigrate however, to newly founded colonies or tradingposts.

There are several resources for images of Zuid-Holland:

Filed Under: Geography Tagged With: Zuid-Holland