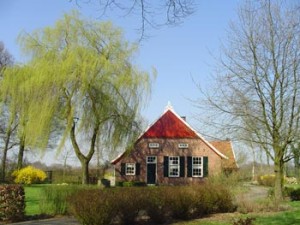 A boerderij is a farm. Sometimes, you will find boerderij doende (doing farm) as an occupation, which means that the person was a farmer. Most farmers were tenants who did not own their farms.

Some farms are very old; not necessarily the buildings, but the agricultural business at that location.  The buildings got renewed, the property got sold, tenants moved in an out, but a farm may have existed on that location for hundreds of years, perhaps even more than a thousand.

Tracing the history of a farm that was owned or run by your family may give you more insight into the lives of your ancestors. It can also give you clues to trace the family back further, since farms were often owned or run by the same family for several generations.

In the eastern parts of the provinces of Overijssel and Gelderland people called themselves after the farm they lived on until 1811.