In parts of the provinces of Drenthe, Overijssel and Gelderland, people used to call themselves after the farm they lived on. It wasn’t until the introduction of the civil registration in 1811 that their names became fixed. My own name, Hoitink, is an example of such a farm name.

Since the name could change every time a person moved, this creates some interesting genealogical puzzles. In this case study, I’m going to give you an example of such a family in my own tree that shows you how to identify parents even when the names keep changing. 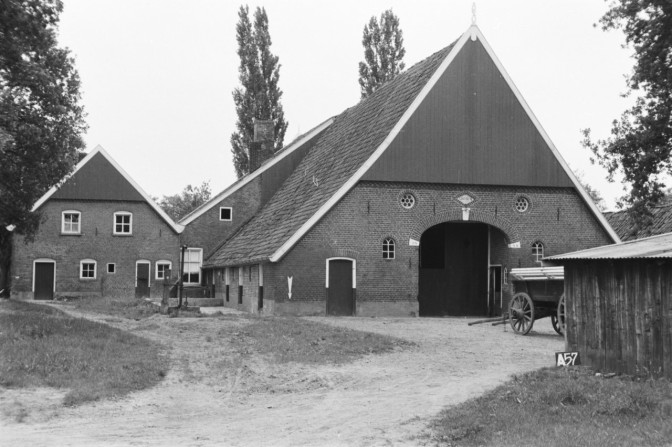 Finding the parents of Geertje Oolthuis

When Geertje Oolthuis had her banns published to marry Reinder te Boske in Aalten, Gelderland on 14 April 1753, her father was listed as the late Teube Oolthuis in Barlo.1 The name of her mother is not recorded in the marriage record, which was customary for this area. Barlo is a hamlet in the parish of Aalten, so that is the first place to look for Geertje’s baptism, which could give us the name of her mother.

The church records of Aalten are indexed at the Gelders Archief website.1 That index provides links to scans of microfilms. Better quality full-color scans are available at the website of the Erfgoedcentrum Achterhoek en Liemers, where the church records are now kept.2

Since this is an area where people named themselves after the farms they lived on, and we don’t know where Geertje’s family was living when she was born, we cannot assume that she was baptized as Oolthuijs.

A search for first person: Ge*r* as dopeling (baptized child) and second person: T*be* as vader (father) turned up several baptisms, including two for a Geertje, daughter of Teube in Aalten in the 15-40 years prior to her marriage:

This shows that Geertje was probably baptized as an Oolthuijs after all, which indicates that her parents were already living at that farm when she was born. The matching names of the parents suggest that these two girls were sisters. The eldest must have died, and the following daughter received the same name, as was the custom. The Geertje Oolthuis who married Reinder te Boske must be the youngest girl.

Finding the marriage record of her parents

The baptismal record identified the parents of Geertjen as Teube Oolthuijs and Berendeken/Berentje Oolthuis. However, when I searched the marriage records for these names, I came up empty. Neither did a search for all marriages of an O*lth* in Aalten turn up the marriage of a Teube to a woman named Berentjen Oolthuis, which could have been the case if Teube moved in with his wife. A search for T*b* as bruidegom (groom) and Be* as bruid (bride) in Aalten between 1700 and 1725 turned up just one entry for a Teube who married a Berendeken:6

The first names match and the hamlet matches, but the last names don’t. Of course, this is not enough to rule them out, since they could have moved to the Oolthuis farm between the time of their marriage and before the birth of the oldest Geertjen. Many young men only married when they had the chance to take over a farm, so moving shortly after marriage was not uncommon.

Finding out who lived at the Oolthuis farm

The next step is to find out if this Groenink-Rensink couple ever lived at the Oolthuis farm. This can require research in tax records, court records, private farm records and manorial records. In this area, a special tax was levied in 1748, for which all residents were recorded. A search for “Oolthuis” and variations in these records turned up this entry:7

Berendken Oolthuijs, widow of Teube Groeninks, has four children, two over the age of 16. Taken oath and paid first term, and the second, and the third, and the fourth [plus some illegible words that have been stricken].

She is listed in the hamlet of Barle (Barlo), between Saeltjen Klomps, Hendr. and Mette Klomps on one side and Aelbert Grotink at Tolkamp, Geert Hillen and his wife Dersken Bullens and Berent Gruetink on the other side. No other Oolthuis entries were found in the 1748 tax record.

The first map known map of this area that shows farms is the 1832 cadastral map. It shows the Oolthuis farm was located between the Greutink and Tolkamp farms on one side and the Kloms (Klomps) farm on the other side.8 These names match the neighbors of Berendken Oolthuijs, which proves that Berendken, the widow of Teube Groeninks was living on a farm named Oolthuijs in 1748 so her name was a farm name. This explains why she is no longer listed by the name of Rensink, which she used when she married.

Cadastral map of Oolthuis farm and surrounding area in 1832

To test the hypothesis that Teube Groenink and Berentjen Rensink were the same as Teube Oolthuis and Berendeken Oolthuis, we can search for their children. If they are the same persons, there can’t be any children of the Groenink/Rensink couple within nine months of the Oolthuis couple.

A search for T*b* as vader and Be* as moeder between 1720 and 1750 in Aalten in the index at the Gelders Archief showed that the couple had the following children:

This shows that Teube and Beerndeken must have lived on the Oolthuis farm by 13 September 1722. Only one of their children was baptized as Groenink, the second son, Zeijne. He fits nicely in the gap between 1722 and 1725. Also, the name Zeijne is very unusual so the fact that Teube Oolthuis and Berendeken Oolthuijs named their first son Zeijne (presumably after Berentje Rensink’s father) is a great indication that the hypothesis is correct.

Burial records weren’t kept in Aalten until 1763, so these haven’t been consulted to see if Teube Groenink a.k.a. Oolthuis died between 1744/1745 (birth of last child in February 1745) and 1748 (Berendeken mentioned as widow at the Oolthuis farm).

A combination of direct, indirect and negative evidence proves that Teube Groenink and Berentje Rensink were the parents of Geertje Oolthuis, the wife of Reinder te Boske:

Teube Groenink and Berendjen Rensink must have moved to the Oolthuis farm by 1722, probably shortly after their marriage. They soon started calling themselves Oolthuis, although the previous name of Teube had not been forgotten and was used in 1723, when their son Zeijne was baptized, and in 1748, when the tax collector recorded the residents of the Oolthuis farm.

This case study demonstrated several strategies that will help in solving farm names:

I hope these strategies will work for your brick walls in these provinces as well!

All websites were accessed on 2 December 2015.