How to find the cause of death

Several people have asked me how they can find out how their ancestors died. Unfortunately, records that list cause of death are routinely destroyed, so most often it will not be possible to find the cause of death. 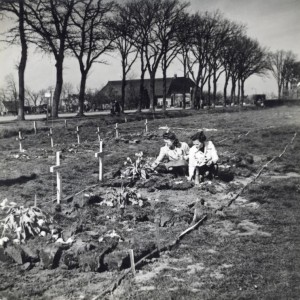 Dutch girls laying flowers on the graves of a temporary graveyard for killed Canadian soldiers. Edderwolde, The Netherlands, 1945.

Registration of causes of death

Since 1865, a doctor must fill out two forms for each deceased person:

Those two forms are submitted to the clerk of the civil registration, who then creates a death record. Death records do not include the cause of death. The forms with the causes of death are sent on to the Central Bureau of Statistics for statistical analysis and subsequently destroyed. So most often, there will be no public records that state the cause of death.

Finding the cause of death

Although they were not supposed to, some municipalities kept declarations of cause of death that included the name of the deceased. Roosendaal in Noord-Brabant is an example, where these records have been kept since 1864. An online index is available at the West-Brabants Archief website.

Other suggestions to find a cause of death:

Filed Under: Reader question Tagged With: cause of death, death record