I vividly remember the first time I visited the Central Bureau for Genealogy in The Hague. I must have been about sixteen years old, and had just started doing genealogy. My mom also became interested and went with me. When we checked the catalog, we found that there was an envelope with prayer cards of people named Flooren, my grandmother’s maiden name. Within minutes, we held the prayer card of Petrus Flooren, my three-times-great-grandfather.

My mom and I were very excited about this find. But we were sternly spoken to by another visitor, who warned us not to steal the card! We were shocked that he would think that of us, we were just very grateful for the opportunity to make a photocopy. The scanned copy below doesn’t do it justice, the original was very beautiful with black and gold ink. 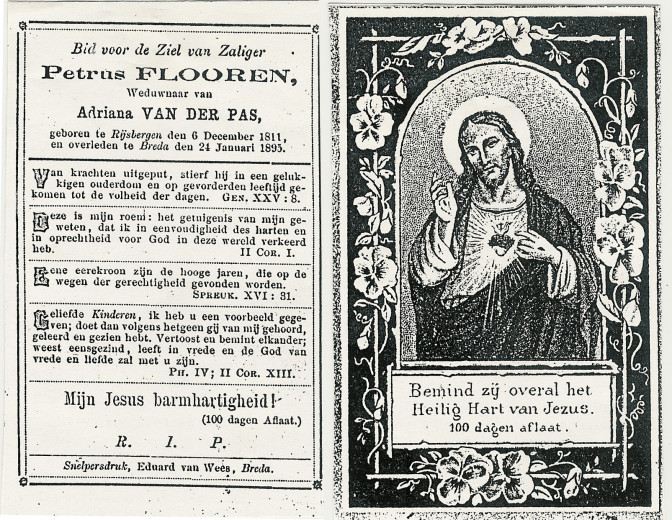 What are prayer cards anyway?

Prayer cards are remembrance cards printed to commemorate a recently deceased person. This is mostly a Catholic tradition. Most prayer cards contain the following information: 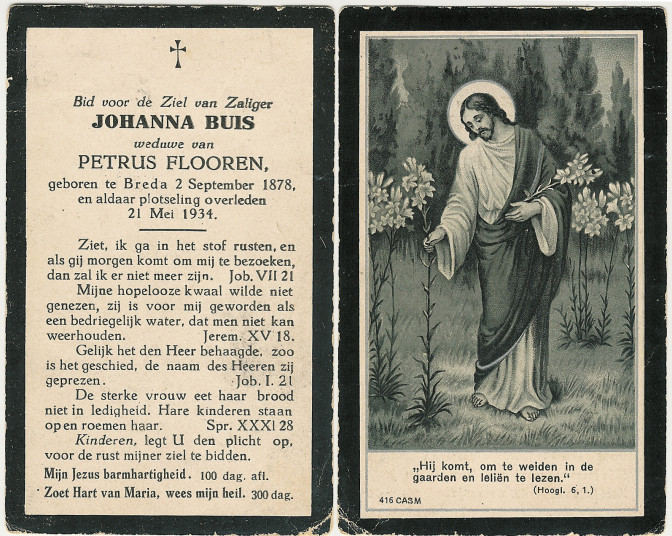 Prayer card of Johanna Buis, widow of Petrus Flooren (grandson of the man in the first prayer card)

Where to find prayer cards

Prayer cards are documents created by the family, not the government. The first place to look for them is in your own family. But many historical and genealogical societies also collect prayer cards, so you might try your luck their.

One of the largest collections of prayer cards in the Netherlands is owned by the Central Bureau for Genealogy. They are digitizing their collection of over one million prayer cards. Until they are available online, the only way to view them is on-site in the reading room in The Hague. Just don’t steal them!