Twenty-five years ago, I was a teenager in high school. I had lost my grandfather the year before. We were looking forward to a new addition to our family: My cousin was pregnant with her first child. My aunt told me it could be twins, since our deceased grandfather had a twin brother. I had never heard anything about this and had always thought opa was an only child.

I was a bit freaked out by the idea that I could run into my dead grandpa’s twin at any time. I asked my grandmother, and she denied that opa had a brother. But the way she said it made me think that perhaps she was hiding something.

That summer, a friend and I went on a train trip across the country with a “Tienertoerkaart,” a cheap railway pass that allowed teens four days of train travel in ten days.  I convinced my friend that one of our trips should be to Breda, the town where my grandfather was born.

We went to Town Hall to ask for my grandfather’s birth certificate. “Older birth records are not here, they are at the City Archives,” was the reply I got. That sounded intimidating but they reassured us it is was open to the public. Luckily, the archive was just behind the town hall, so we went there immediately.

We were helped by a friendly archivist who explained that my grandfather’s birth record was not public yet, but we could check the population register. And there I found it. Opa did indeed have a brother! By comparing the dates, I saw that his mother had had a child before she married my great-grandfather. So opa did not have a twin, but a half-brother. 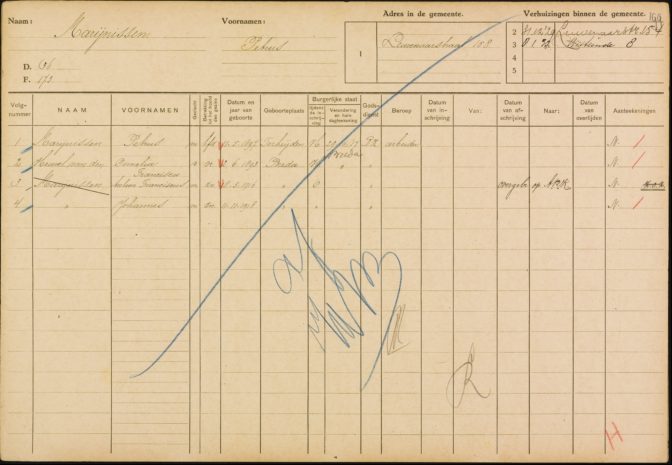 Population register showing my grandfather and his half-brother

I was fascinated that I could find records about my family so easily. My great-grandmother was born in Breda too, so I looked up her birth record, and then her mother’s. I found out she was born out of wedlock too, acknowledged three years later when her mother married. Because of the delay, I dismissed the man she married as the biological father (rookie mistake).

After just an hour or so of doing genealogy, I had found two family scandals. I was hooked. I wanted to keep going (“just one more record”), but my friend wanted to go shopping. I promised I would be back. That day, I became a genealogist.

Back home, I confronted my grandmother with my new-found knowledge. She confessed that she did know that grandfather had a half-brother, but he had been a black sheep later in life so they did not keep in touch. Then she rumbled through some papers and pulled out a life insurance policy on the life of that half-brother, taken out in the 1920s by his mother. She gave it to me, and said that if it had any value, I could have it.

I had no idea how I could find out whether the half-brother was still alive. I went to the library and discovered a tiny section of books on genealogy, including a genealogy course book by Rob van Drie. That told me that the Central Bureau for Genealogy kept personal record cards of deceased people. If the half-brother was dead, I should be able to get his card.

I ordered the personal record card and received it a few weeks later. The half-brother had died just a few months before my grandfather. I was sorry to miss the connection, but not having known him I was not too upset.

The next summer, my mom and I used that money to stay at a hotel in Breda for a week. We traveled around the various villages and visited archives. We were able to trace her family back several generations, meeting lots of interesting people along the way and finding the houses where our ancestors lived.

In the meanwhile, I had also begun work on my father’s side. His family came from Winterswijk, where my mother grew up. Winterswijk was closer to Oldenzaal, where we lived at the time, so we would drive there sometimes to do research at the municipal archives or at the library. I discovered the collection left by Dr. Das, including compilations of who lived on each farm between the 1600s and 1800s. That allowed me to trace my family back easily. I found out that the original records were kept at the provincial archives in Arnhem and went there to verify the information.

In 1992, a year after I started doing genealogy, my paternal grandparents celebrated their 50th wedding anniversary and I presented them with a book I had made about their ancestors. It was a joy to go over the pages with grandpa, who was very interested. He had lots of family photographs and old postcards that we would study together. Since my grandparents are now both deceased, I have received these photographs. To me they are doubly precious: both for the people in the photos, and for the memories of going through them with grandpa. 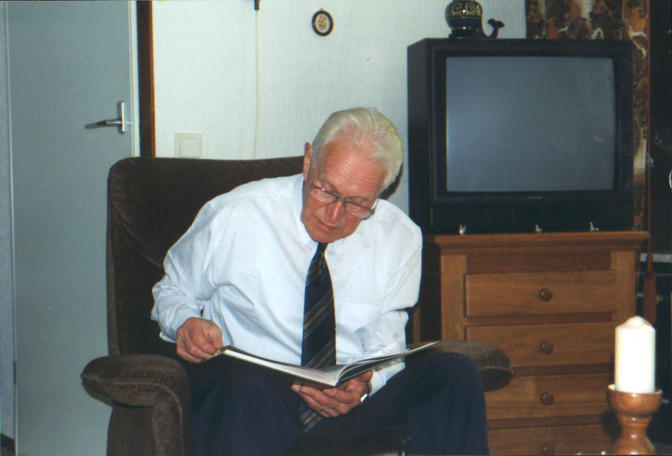 I graduated from high school in 1993. I loved doing genealogy but did not think I could make a career out of that (hah!). So I did the sensible thing and chose to study computer science and business management instead. The computer science faculty provided us with free webspace, to try out this new technology called the World Wide Web.

I started a website about Dutch Genealogy, the predecessor of the website you are reading today. As one of the first people in the world to have a genealogy website, that made me an instant internet genealogy expert. I was asked to give lectures all over the country and wrote a book on the topic. 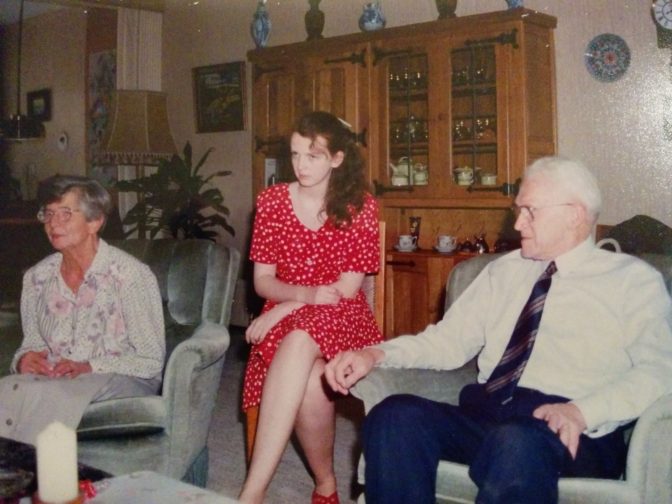 My grandparents and I in 1992 when I was sixteen

I am so glad I started as young as I did. I got to talk to various members of the older generation about their ancestors. Through my website, I was able to lay the foundations of a successful career as a professional genealogist. And I hope to have about fifty years more time than the average genealogist to do all the research I ever want to do. My certification by the Board for Certification earlier this year was a wonderful way to celebrate twenty-five years of doing genealogy.