For the seventeenth and eighteenth century, church records provide the most complete records for genealogical research. The church recorded the baptisms, marriages and burials of their members. Many of those records have survived to this day.

Since the early days of Christianity, people have been baptized, married and burried by the church. The church has not always kept records of these events. In the Netherlands, the oldest surviving church records date back to the sixteenth century.

When the civil registration was introduced, churches were required to hand over their registrations. To this day, most of the church registrations can be found in the provincial archives because of this decision.

The most important church records are:

In Dutch these are called Doopboeken, Trouwboeken and Begraafboeken. They are often referred to using the acronym DTB. 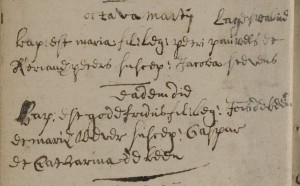 Baptismal records record the baptism of a child. For most religions, the baptism took place within two weeks of the birth. An exception is the baptist church, which only baptized adults.
The baptismal record lists the following information:

The baptism had to be witnessed by at least two people. In Catholic families, these were the godparents.

In the case of children born out of wedlock, this was noted as well. The term “hoerkind” (child of a whore) is used sometimes to denote these children. This does not mean the mother was a prostitute, it only reflects what the record keeper thought of her morals. In Catholic records, the words “illegitimus” or “illegitima”, sometimes shortened to “illeg:” means the child is born out of wedlock. 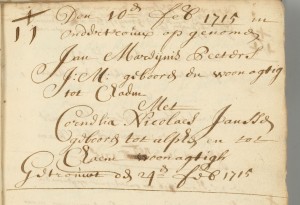 From 1648 until 1795, the Catholic marriage was not considered a legal marriage but Dutch reformed marriages were. This means most catholics married twice: once before the Catholic church and once for the law. The legal marriage could either be before the court or in the Dutch Reformed church. It often pays to check both records since very often different details are noted in the different records.

At a minimum you can find the following information:

The announcements had to take place in both the places or residence of the bride and groom. This gives you an extra opportunity to find additional information. If the person had only lived there for a short while, the marriage had to be announced in the previous town as well. In every town where the marriage was announced, it was registered as well. It is not uncommon to find three or four different marriage records for one couple!

Burial records are the most difficult church records to work with. They often contain very little information. Most burial records only record the name of the deceased. Sometimes not even that is written down, only entries like “the old woman on the Woordes farm”, “Jansens maid”, etc. Descriptions that probably made perfect sense to the locals back then, but very hard to figure out today.

Some entries are more helpful, and list the names of the spouses or the address and whether they left any children behind. Most burial records record only the burial date, but some include the death date as well.

Where to find church records?

Church records can be found on the websites of archives, or in national portals like Open Archives, WieWasWie, or Archieven.nl. FamilySearch also has many scans of church records, but many are unindexed. You can search the catalog for the name of the town.