Differences between Genealogy in the Netherlands and the US

On Facebook, Linda Roos asked me about the differences between genealogy in the Netherlands and the United States. That topic warrants a longer reply than I gave her on Facebook, so here we go!

In the Netherlands, we have an abundance of high-quality sources. Since 1850, we have had the population register, recording who lived where: not just every ten years but kept up-to-date. Civil registration records of births, marriages, and deaths go back to 1811 or even earlier. Before 1811, we have church records that often go back to the early 1600s, and court records that may go back even further. Most of these records were created at or near the time of the event, in the presence of eyewitnesses.

Compare that to the US, where several states did not require registration of births, marriages and deaths until the early 1900s, and even then many people lived far away from the courthouse and did not record their vital events until months or even years had passed. As late as the 1800s, people were living in places before the record keepers arrived. To this day, the US does not keep population registers that trace where people live and move to, but just has a census every ten years.

In the US, many courthouses burned down during the Civil War, wiping out records for entire communities. In the Netherlands, we had some record loss during World War II, but that is limited to a few locations and usually only involves one or two record types per area, not a total loss. Even in Zeeland, where a large part of the church records were lost, we can usually work around the loss by using court records. 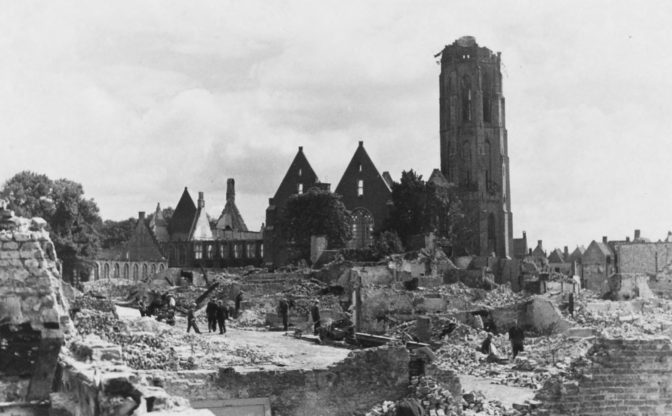 Middelburg after the bombing of 1940. Credits: Zeeuws Archief (public domain)

In the Netherlands, most problems are solved using direct evidence. The solution to most genealogical problems is to keep looking until you find a record that gives you the answer. Because we have so many high-quality sources, that often works.

In the US, scarce sources require people to squeeze the most out of them and to build cases using indirect or negative evidence. In the Netherlands, it is rare to see a proof argument, even in reputable journals.

Which brings me to another difference: peer-reviewed journals. We have several genealogical magazines and journals in the Netherlands, but most have editors that will do just basic editing. Many of these magazines are grateful for any content and will publish it without being too critical of its contents or underlying methodology.

There are journals that have more rigorous editors, but I don’t think we have any that use a peer-review system such as used by American journals like the National Genealogical Society Quarterly, the New York Genealogical and Biographical Record and the New England Historical and Genealogical Society Register. These journals don’t just share research results, but also teach readers best practices by publishing case studies where brick walls are solved using indirect or conflicting evidence and advanced methods for analysis and correlation.

5: Distance to our ancestors

Most Dutch genealogists live close to the place where their ancestors were from. For instance, my father was born in Winterswijk, and all 2,000+ ancestors of his that I have traced so far were born less than ten miles from the house where he was born. Winterswijk is about 90 minutes from my home. I can visit all the places where his ancestors ever lived in a single day. And they spoke the same language as I do, so I can read the records about them.

In the Netherlands, most of us grow up knowing where our ancestors were from. Our parents or grandparents were probably born in the same town as their ancestors. We know where we came from and don’t have a burning desire to find out.

In the US, most people know they are descendants of immigrants and want to know where their family came from. Genealogy is much more popular there than it is over here. Tracing the immigrant ancestor back to his place of origin is a major milestone in many American genealogists’ projects.

When American genealogists come to the Netherlands to see the place where their ancestors are from, they are often disappointed that their distant cousins are less interested in them they would hope. They forget that these Dutch cousins have no tradition of having family elsewhere in the world, and have not wondered if there are any cousins out there. Some are very welcoming, others simply don’t care.

Because we have such good sources and can so easily go to archives to do research, most Dutch genealogists have very complete trees. Except for some unknown fathers of illegitimate children, I have traced most of my ancestral lines back 10+ generations. On my father’s side, I only miss one couple in generation 9. Most of us are able to trace our male line back to the early 1600s, if not before. If I compare that to most trees I see on Ancestry, ours are much more complete. This is especially useful when trying to find out how a DNA match is related.

Because of the challenges that American genealogists face and the strategies they needed to develop to overcome them, it is no wonder they are much further along when it comes to formulating genealogy standards. In the Netherlands, the “seven pillars of genealogy” were only formulated last year. They overlap with the Genealogical Proof Standard as formulated in the United States in the late 1990s.

In the United States, the Board for Certification of Genealogists formulated a larger set of genealogy standards, capturing best practices to help people do genealogy the right way. In the Netherlands, there are no standards for good genealogy, apart from “we know it when we see it.”

In the Netherlands, opportunities for advanced genealogical education are limited. Genealogical societies and archives offer lectures, workshops, or paleography classes, but these are often aimed at beginners or intermediate genealogists. Not a single university or college offers a genealogy degree, or even a class. There are no institutes that teach advanced methodology, like the Salt Lake Institute for Genealogy or the Genealogical Research Institute of Pittsburg in the US. I also don’t know of any societies in the Netherlands that provide webinars or other forms of online education, while this is a common way for remote education in the US.

Dutch society puts a much higher value on privacy than American society. In the Netherlands, privacy laws restrict access to records of people who were born less than 100 years ago. This makes it difficult to trace living cousins. As a professional genealogist in the Netherlands, you need a private investigator license to research living people; one of the reasons I do not offer this service. In the US, much more information is part of public records, and available to anyone.

Using DNA testing for genealogical purposes is a lot more popular in the US than in the Netherlands. I think there are several reasons for this:

In the Netherlands, genealogy used to be almost exclusively male. More women have joined in the last couple of years, but most researchers in the reading rooms are still male. You can imagine my surprise when only one of my classmates at the Salt Lake Institute for Genealogy was male. In the United States, the majority of genealogists are female. 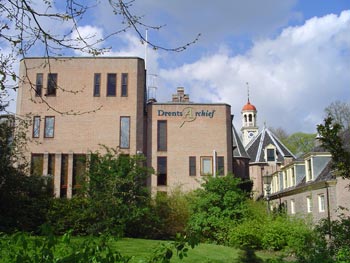 In the Netherlands, most records are not kept by the organizations that created them, but in specialized archives whose sole purpose it is to preserve the records and provide access. Most regional or provincial archive have a wide range of records, including church records, government records and the records of larger companies or societies in their area. These are one-stop-shops for genealogists. Most archives provide online finding aids, which allow you to see exactly what they have.

In the US, records are much more dispersed and are often still at courthouses. Serving researchers is not their main goal.

In the Netherlands, we have an archive law that allows anyone free access to public records, including the right to make copies at your own expense. Large digitization projects are funded by the government and the results are available online for free. Some archives provide their genealogical information as open data, encouraging people to re-use it in whatever way they want. As a result, Dutch genealogists are not used to paying for access to information.

In the US, commercial organizations play a large part in providing access to genealogical information. Most of the records are published not by the archives, but by organizations such as Ancestry or FindmyPast. American genealogists often subscribe to several paid websites.

In the Netherlands, there are few professional genealogists. There are a several dozen genealogists who occasionally take clients, but probably less than five who make a living doing genealogy.

The Dutch market is small: people who care enough about genealogy usually do it themselves, and people who don’t care enough don’t want to pay for it. Because we have such a small country, it is easy to just drive to the archives, so most genealogists all of their own research. From where I live, I can visit any archive in the country in under two hours.

As a result, professional genealogy is an unknown career. I’m often laughed at when I tell people what I do for a living, even by archivists. “People are willing to pay for that?”

In the United States, there are thousands of professional genealogists. It is not uncommon for genealogists to hire another genealogist to do research in a place that is inconvenient for them to visit themselves.

I think it is interesting to compare the two countries and to try to analyze why genealogy developed in different ways. Both countries have their strengths and weaknesses when it comes to genealogy, and can learn from each other. Seeing how things are done in other countries opens our minds to new ideas we can apply to our own situation.

Filed Under: Blog Tagged With: methodology