In the nineteenth century, there were several Dutch language newspapers in North America. The Dutch were spread all over the Mid-West, looking for opportunities to buy good farm land at a cheap price. These newspapers formed an important link in those migration chains, where people shared news about their colonies and the people who lived in them.

Several of these Dutch newspapers have been digitized and are available via Delpher. You can search them for the names of your ancestors, but also for the names of the places where they settled to learn about their conditions. 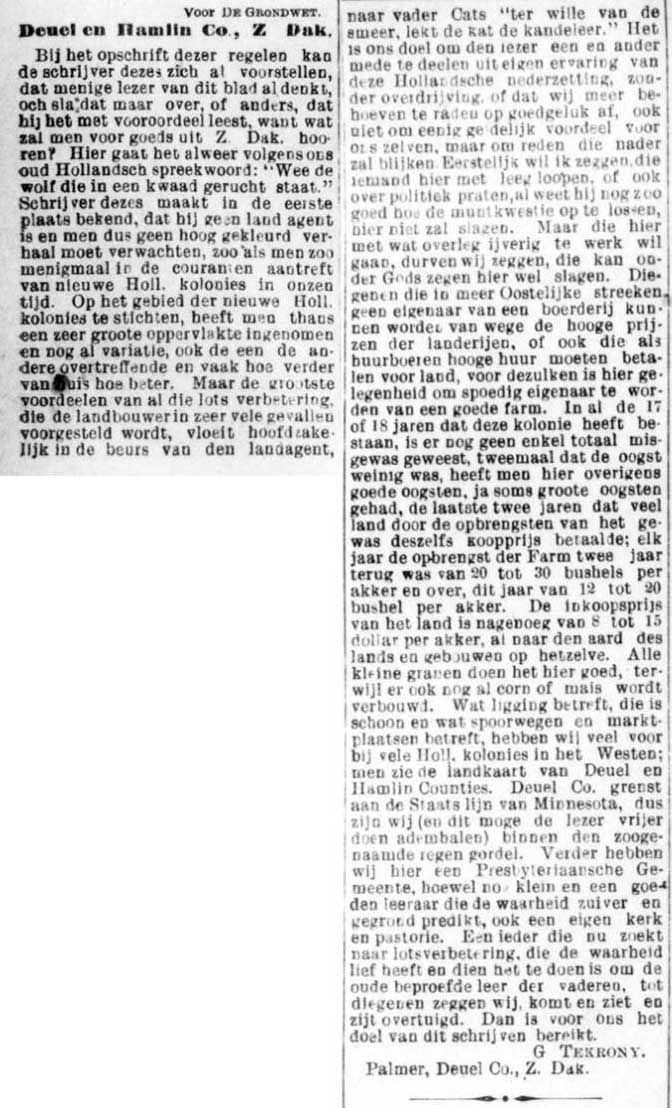 One of the lesser known Dutch settlements was in Deuel county, South Dakota. Here is what my second cousin four times removed, Garrit Jan te Kronnie, had to say in 1897 about the place where he settled:

When writing these lines, the writer of said article can imagine that many reader of this people will think, oh, let’s skip that or otherwise, that he will read it with prejudice, because what good will one read from South Dakota? It will go according to that old Dutch saying “Beware the wolf who stands in bad rumor.”

The author of this work first likes to make known, that he is no land agent, so one should not expect a highly painted story like one so often finds in papers about new Dutch colonies in our times. Regarding the new Dutch settlements, one currently has occupied a large territory with many variations, each one surpassing the other and often, the further away from home, the better.

But the greatest advantages of these improvements of fate, presented to the farmer in many such cases, will mainly flow to the wallet of the land agent, according to Father Cats “to get the fat, the cat will lick the chandelier.” It is our purpose to inform the reader some things from our own experience of this Dutch settlement, without exaggeration or that we have to guess based on good luck, also not for any profit for ourselves, but for reasons that will appear shortly.

First I would like to say that somebody who wants to be idle, or wants to talk politics, even though he may be able to solve the coin issue, won’t succeed here. But those who are willing to cooperate and work dilligently, with God’s blessing can succeed. Those who cannot become an owner of a farm in the Eastern parts, on account of the high prices of farms, or who have to pay high rents as tenant farmers, for those there is here an opportunity to quickly become the owner of a good farm.

In all 17 or 18 years that this colony has existed, we haven’t had a failed harvest once, twice we had a poor harvest, and often one has good harvests, sometimes even great harvests. The past two years the proceeds of the crops were able to pay the purchase price; two years ago the harvest was 20 to 30 bushels per acre and this past year it was 12 to 20 bushels per acre. The purchase price of land is from 8 to 15 dollars per acre, depending on the nature of the land and buildings on it.

All small grains do well here, while corn is also being cultivated. The location is beautiful and in terms of railroads and markets, we have many advantages over many Dutch colonies in the west, one refers to the map of Deuel and Hamlin Counties. Deuel County borders the State Line with Minnesota, so we (and this will allow the reader to breathe more easily), are within the so-called rain belt.

Furthermore, we have here a Presbyterian Community, which although still small has a good preacher who tells the truth purely and with reason, also an own church and rectory. Each one who is looking for improvement of fate, who loves the truth and is out to hear the old tested teachings of our fathers, to those we say, come and see and be convinced. Then our goal in writing this will be fulfilled.

Isn’t it wonderful what you can learn from accounts like these? It makes me wonder what the “coin issue” was, and how it affected the Dutch settlers. It shows that Garrit Jan was well pleased with his choice of settlement. Several other Dutch families also moved to Deuel, possibly inspired by this article.