Adriaen van der Donck has been described as one of the first true Americans: a man with more loyalty for his new country than his old. After obtaining a law degree, he left for the New Netherlands in 1641 to help establish law and order in the colony. At this time, the colony was under the leadership of the Dutch West Indies Company who appointed a governor to enforce their will.

Adriaen van der Donck wanted the colonists to have the same rights as citizens of other Dutch towns, a viewpoint that often sent him on a collision course with Peter Stuyvesant, the governor of the New Netherlands. To convince the Dutch government, he wrote a vivid account of the New Netherlands that speaks of his love for his new home.

Adriaen van der Donck was born in Breda in the province of Noord-Brabant. His parents were Cornelis Gijsbrechtsz. van der Donck and Agatha van Bergen. He was named after his maternal grandfather, the famous Adriaen van Bergen. Adriaen van Bergen had been a captain in the army of Maurits during the Eighty Years War. In 1590, he managed to deliver Breda from the Spanish using a trick straight from the Illiad. In a maneuvre inspired by the Trojan horse, he filled a peat boat with soldiers and had the boat pull up to the city. 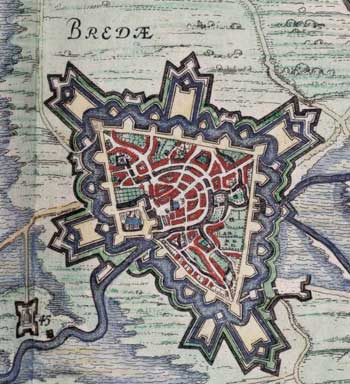 In 1638, Adriaen van der Donck enlisted in the renowned university of Leiden to study law. In 1641, he was hired by Killiaen van Rensselaer to oversee his property in the New Netherlands.

On 17 May 1641, Adriaen van der Donck left the Netherlands on the ship the ‘Eyckenboom’ (‘oak tree’). He arrived in New Amsterdam and went on to the Rensselaerwijck property near where Albany is today. He managed the estate for his patron but often did was he felt was best even if that went against his patron’s wishes.

On 22 October 1645, he was married to Mary O’Doughty, a daughter of an English minister. The couple was married in New Amsterdam.

To thank him for his help, Van der Donck was allowed to purchase land of his own. He established his own estate Colen Donck (Van der Donck colony) near New Amsterdam where he moved to in 1646. Soon, this property became known as Yonkers (‘jonker’ is the Dutch word for a member of the lower nobility, often used for a land owner as well). 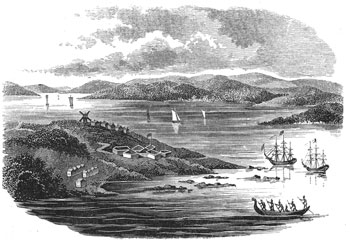 Soon, Adriaen van der Donck became involved in New Amsterdam politics. Peter Stuyvesant, the new governor, appointed him as a member of the council of nine in 1648. This council represented the inhabitants of New Amsterdam, although it was only an advisory board without real power. All the decisions were made by the governor.

Spokesperson for the colonists

The colonists wanted to have a say in the running of the colony, just like citizens of Dutch towns had a say in running their towns. They chose Adriaen van der Donck to present their case in the Netherlands. Peter Stuyvesant opposed this idea that he perceived as a threat to his own power. Nevertheless, Adriaen van der Donck went back to the Netherlands in 1649 to present their case to the Dutch authorities, the States General.

Back in the Netherlands

The colonists wanted to be free from the rule by the West Indies Company and be ruled by a city council chosen from among themselves. Adriaen van der Donck wrote a lengthy petition about this. In this petition, he complained about the way the colony was managed by the West Indies Company and the governor they appointed. The way the Indians were treated was used as an example of the bad conduct by the WIC.

As an appendix to his request, Van der Donck provided the States General with a description of the New Netherlands. He also had this description printed. It is one of the earliest descriptions of America, which includes descriptions of the fauna, flora and natives. Adriaen van der Donck hoped not only to convince the government, but also the Dutch merchants of the value of the new Dutch property. He was very successful in the last respect. Several ships full of colonists left for the New Netherlands as a result of his publication. 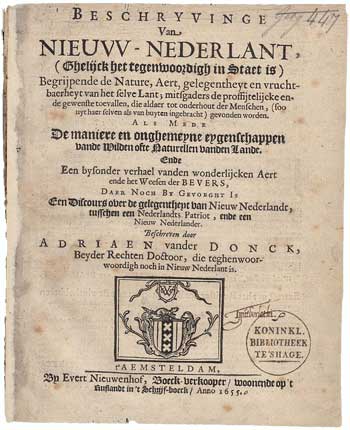 A few quotes (translated into English) will illustrate what he wrote:

This land is naturally fruitful, and capable of supporting a large population, if it were judiciously allotted according to location. The air is pleasant, and more temperate than in Netherland.

The natives are generally well-set in their limbs, slender round the waist, broad across the shoulders, and have black hair and dark eyes. They are very nimble and active, well adopted to travel on foot and to drag heavy burdens. … They are divided into different tribes and languages, each tribe living generally by itself, and having one of its number as a chief, though he has not much power or distinction except in their dances or in time of was. Among some there is not the least knowledge of God, and among others very little, though they relate very strange fables concerning Him.

The English have sought at different times and places to colonize this river, which, they say, is annexed to their territory, but this has as yet been prevented by different protests. We have also expelled them by force, well knowing that if they once settled there, we should lose the river [Delaware] or hold it with difficulty, as they would swwarm there in great numbers. There are great reports daily, that the English will soon repair there with many families.

At first, the States General ruled in favor of his request and ordered that Stuyvesant should return to the Netherlands. The outbreak of the Anglo-Dutch war prevented this. The Netherlands needed the military powers of the West Indies Company. Adriaen van der Donck was considered a liability and was not allowed to return to the New Netherlands for a couple of years.

Back in the New Netherlands

On 4 May 1652, Adriaen van der Donck and his wife Mary are unlisted as members of the church in Breda, where they had been living. Finally, they were allowed to go back to the New Netherlands, under the provision that he would stay away from politics. They went to live on the Yonkers estate again.

In 1655, there were new problems between the Dutch and the Indians. Many Dutch were killed during Indian raids on Dutch settlements. Adriaen van der Donck died late 1655 or early 1656. Although the manner of his death is not described anywhere, it is is known that his estate was raided by the Indians during that time so it’s very possible that his death was a result of this.