Overboord means “overboard,” in the literal sense of going over the side of the ship. It is one of many Dutch nautical terms that made its way into English.

In death records or newspaper articles, you may sometimes find that your ancestor was overboord geslagen [went overboard] and drowned. 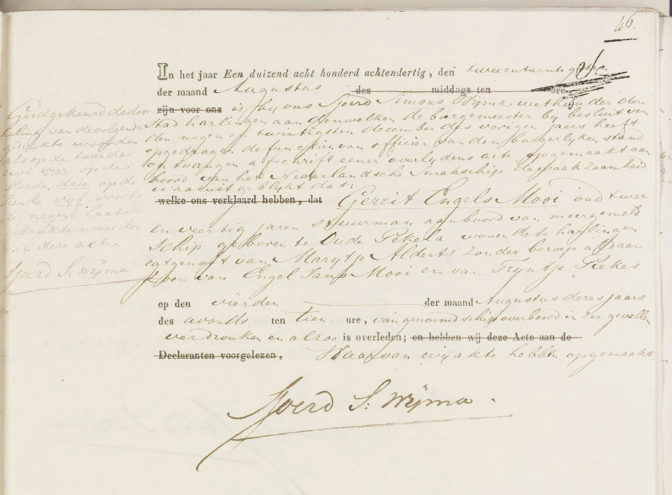 Recorded an extract of a death record created on board of the Dutch “smakschip” [light coastal ship] De Waakzaamheid [the watchfulness] which indicates that Gerrit Engelse Mooi, age 42, mate on said ship, born in Oude Pekela, living in Harlingen, husband of Marijtje Alderts, without occupation living in that location, and son of Engel Jans Mooi and Trijntje Piekes,
fell overboard of said ship on 4 August of this year at 10 PM, fell into the sea and drowned.

This record is a rare example of a death record that shows the cause of death, as that was usually not recorded.

Hattip: Dutch Genealogy Facebook Group, where this term was discussed in response to a question.

Filed Under: Dutch terms Tagged With: cause of death, shipping