Did you ever wonder how your emigrant ancestors bought their tickets and how they knew where to find a ship to go to America? By the end of the 1840s, many shipping companies had agents in most of the emigration hot spots. Emigrants would be able to purchase tickets form these agents, who would arrange for their travel to the harbor and for the trip across the Atlantic. Agents often advertised in newspapers to make people aware of their services. By searching newspapers for the town where your ancestors left from, you can check if there were any agents offering their services. The most comprehensive website for newspapers in the Netherlands is Delpher.

The following ad gives an example of Gerrit Jan Bluemers, who was an agent in Winterswijk in 1849. The ad translates to:1

To North-America for emigrants.
Regular weekly opportunity from Rotterdam to Havre [Le Havre, France] with the steam boats:
Rotterdam, captain Coutard
Hambourg, captain Maresal.
and from Havre with the regular post-package ships, which leave every week from there to New York and New Orleans, a passage that usually takes 20 to 24 days.
Enquiries regarding passage and price can be made at Mr. Smith & Co in Rotterdam and at
G.J. Bluemers, agent in Winterswijk
who also offers several good and nice oak trees.

Many Winterswijk emigrants left Europe from Le Havre, which was usually less expensive than leaving straight from Rotterdam. This advertisement helps us to understand how they would know that that cheaper option was available. The ad shows that dealing in boat tickets wasn’t the only business Bluemers was involved in, he also traded in wood and was apparently trying to save some money by advertising both services in the same ad. 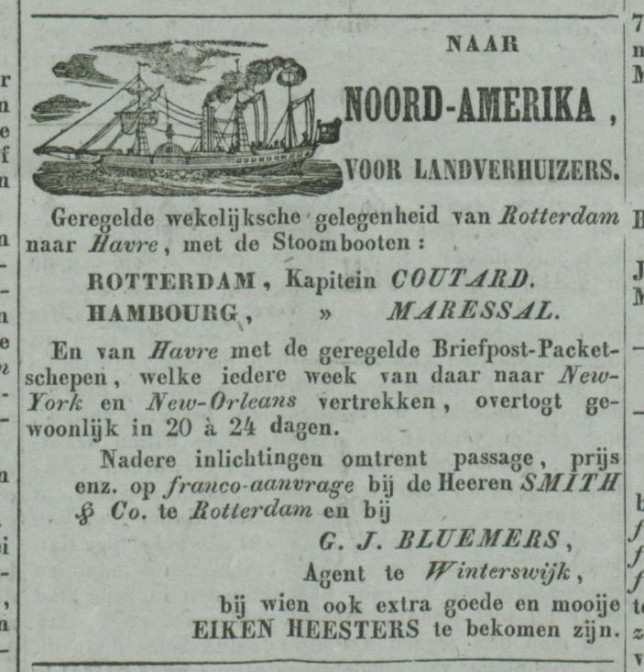