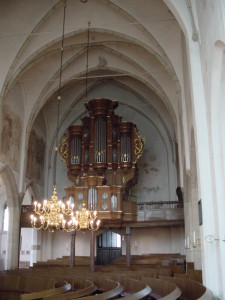 In Dutch Reformed Churches, most members had their own seats in the church. They would have benches built at their own cost, and had a reserved spot in the church for their use. Often, they had to pay for the privilege of having a bench in church, which provided the church with some extra income.

The ownership of a bench and right to a seat in the church was a prized possession that was often also mentioned in wills or property divisions. Because the entitlement to such a seat was so sought-after, people often fought over it. Two examples from Aalten show us just how far people would go to protect their rights.

On 14 March 1697, Mr. Pijper and his wife appeared before the council of the Dutch Reformed Church in Aalten, Gelderland. They complained how the wife of Jan Mertens had pushed Mrs. Pijper from the bench on several occassions. She was entitled to two seats in the bench, which belonged to her house. When called before the council, Martens and his wife replied that the bench was ruined during the occupation by the Bishop of Münster in 1672/1673 and had been rebuilt at their cost, so it was now their property. The church council ruled that this did not negate Pijper’s rights, so they could reclaim their two seats, on the provision that Pijper would pay his share of the costs.1

Four months later, on 24 July 1697, Berent Gussenklo appeared to consult the council about a dispute between Berent Gussenklo, Willem and Dersken Freers and Geurt Lomans about their bench in the church. Their accounts had many similarities, but they also disagreed whether Gussenklo was entitled to the front part of the bench or that they could all sit where they wanted.

The church council determined that Gussenklo’s wife would be entitled to the front part of the bench, on the provision that she made room for her aunts Freers and Lomans to pass and take their seats.2

Brokers of the peace

What I love about these records is to see how my ancestors acted. It tells me how their lives were affected by the occupation of the Münster troops, who wreaked havoc in the church and destroyed their seats. Elsewhere in the minutes, the Dutch Reformed minister describes how they were locked out of the church for two years, because it was given to the Catholics.3

It also shows how petty they could be, even to their own relatives. Berent Gussenklo and Geurt Lomans are ancestors of mine. I don’t yet know how Willem and Dersken Freers fit into the picture, but since Dersken was called an aunt she must be related as well. A wonderful example of how church council minutes can help you build your tree, not just by providing background information but also with information about relationships.

It also shows how the church council had a role as mediators in the community. People brought their grievances before them, and they arbitrated the disputes, often seeking compromises that both parties could live with.