With the 70th anniversary of our liberation coming up next week, I thought I would discuss one of the most important record groups for research into World War II.

During World War II, several Dutch citizens collaborated with the German occupation: some joined the National Socialist Movement (NSB), others betrayed Jews or were romantically involved with German soldiers. After the War was over, hundreds of thousands of Dutch citizens were prosecuted for collaboration or treason. If convicted, they could receive a prison sentence and have some of their rights, such as the right to vote, revoked. If they worked for the government, they would also be fired. Large ‘cleansing’ operations rid the government of German sympathizers. 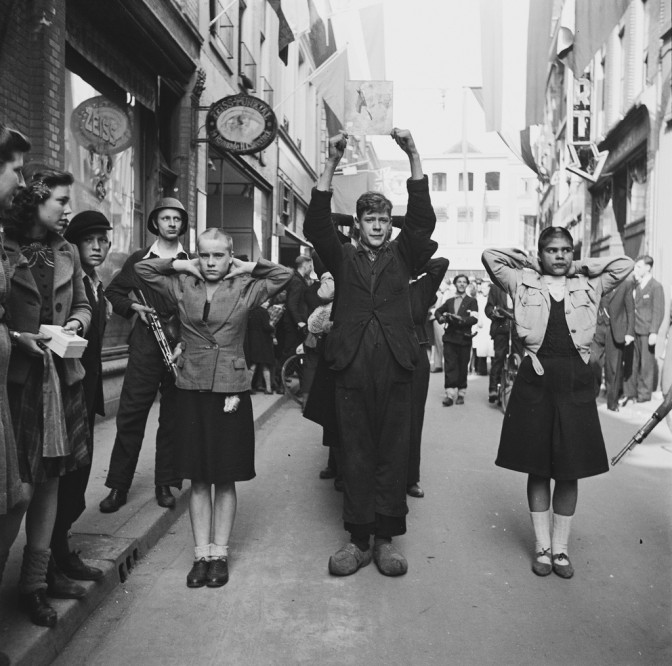 The records about these trials are kept in the  Central Archives for Special Criminal Jurisdiction [Centraal Archief Bijzondere Rechtspleging or CABR] at the Nationaal Archief [National Archives] in The Hague.

Contents of a CABR file

I have done research in CABR files on several occasions. The files I’ve seen range from one page (an unsubstantiated complaint by a neighbor) to several thick file folders (a person who was actively hunting Jews in return for a bounty ). In the cases where people were brought to trial, you can find information about the investigation and about the trial itself.

In the case of the Jew hunter, I was surprised to find how much personal information the file contained: family photographs, membership cards of organizations, letters by family and friends acting as character witnesses. There were also witness statements by surviving Jews, by Dutch people who had seen how the Jews were taken away and by policemen who were involuntarily involved in the deportations. Needless to say, some of these witness statements were very sad to read.

How to find out if there is a file

The CABR files are indexed by name of the person who was prosecuted, not by names of their victims. To protect the privacy of living people, access to the CABR files, including the index, is restricted until 2025. If you want to know if there is a file about a family member, you can ask the Nationaal Archief, who will do a preliminary investigation for you free of charge. They will only do this if you can prove that the person is deceased or if you have permission by the person involved.

Tip: Make sure to provide information about the occupation during the war. If the person involved was a government employee, the National Archives will check if they appear in the ‘cleansing files’ [Zuiveringsdossiers] too.

Just because there is a file, does not mean that your ancestor was a major war criminal. Many more people were investigated than were convicted. My own grandfather has a CABR file, because a neighbor complained about him selling a radio during the war. The complaint was dismissed and my grandfather went on to serve in the Koninklijke Marechaussee [Royal Military Constabulary], a position he could only get with an unblemished reputation. But even these thin files can tell you more about your ancestors.

See the CABR research guide of the Nationaal Archief for more information and the request form.

If there is a file, you can consult it in the reading room in The Hague by making an appointment. Because access to the files is restricted, making copies or photographs is not allowed so be prepared to take lots of notes.

Because of the nature of the records, reading the files can be very emotional. Often, they will contain tragic stories and you may find out things about your ancestor that are painful to know and may differ from the stories you have been told. Especially because these are probably people you knew personally, this can really hit home. It can be helpful to bring a friend for support. If you do, be sure to make an appointment for two.

If you are not in a position to do this research yourself, you can hire me to do it for you. Please contact me for more information.