In May, I wrote about my ancestor Johanna van Groezen, who became a wife, mother of two children, and a widow; all in 1864. Her husband Adriaan Marijnissen died in Strijen on 29 October 1864 at the age of twenty-six.1 I had been unable to find out how Adriaan Marijnissen came to die in Strijen, away from his residence in Made, or how he died, since Dutch death records do not include the cause of death and I was unable to find anything in newspapers.

After publishing the article, I decided to do more research. On the website of the Regionaal Archief Dordrecht, I found the finding aid for the municipal records of Strijen. That included a series of protocols by the mayor as head of the local police, spanning the period 1853 to 1907. I wrote to the archives to describe what I was looking for, and was delighted when they sent me the scans of the police report. 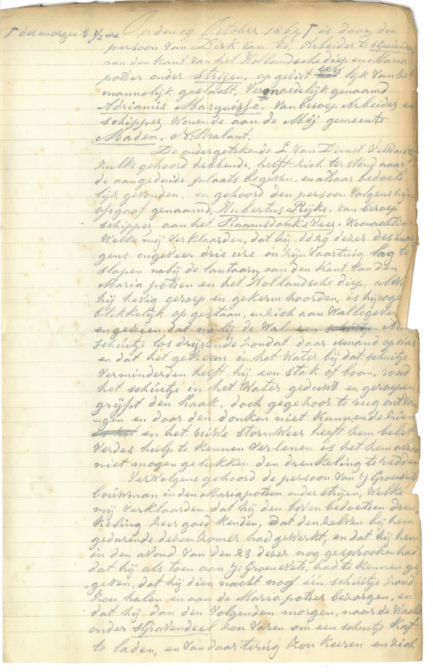 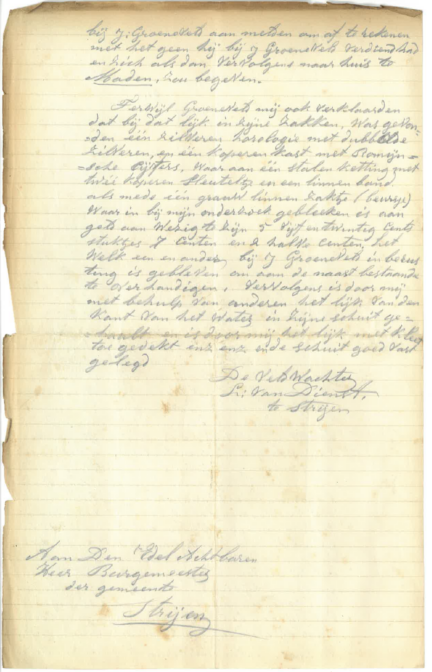 So what happened to Adriaan? The police officer reports as follows.

Dirk van Es, a laborer in ‘s-Gravendeel, found the drowned body of a man on the side of the Hollandsche Diep near Maria Polder, apparently named Adriaan Marijnisse, a laborer and skipper from Made. The police officer went to the scene and interviewed Hubertus Rijker, a skipper from Raamsdonksveer. He described how he had been sleeping in his ship that night, and around 3 AM heard someone screaming. He saw a small boat floating without someone on board, and that the screams came from the water. He held out a hook and yelled for the drowning man to grab onto it, but he failed. Because of the rough storm, he was unable to provide further aid to save the drowning man.

The officer then heard J. Groeneveld, a farmer in the Mariapolder near Strijen. He said he knew the deceased well, since he had worked for him the previous summer, and had spoken to him the previous night. Marijnissen had told Groeneveld that he would do one more delivery to the Maria Polder and would go to ‘s-Gravendeel the next morning for new cargo, and would then head home to Made.

Groeneveld declared that his pockets contained a silver watch, and a linnen purse which had five 25-cent pieces, seven cents, and two half cents, which Groeneveld kept to give to the next-of-kin. The police officer then proceeded to take the body from the water into the boat and covered it with a cloth.

That is the end of the report. It not only told us how and exactly where Adriaan Marijnissen died, but also about the type of work that he did, that he worked in Strijen during the summer, and even about his personal possessions. I am glad that Groeneveld was able to identify the body, or else his widow could have been waiting for a long time to learn what had happened. 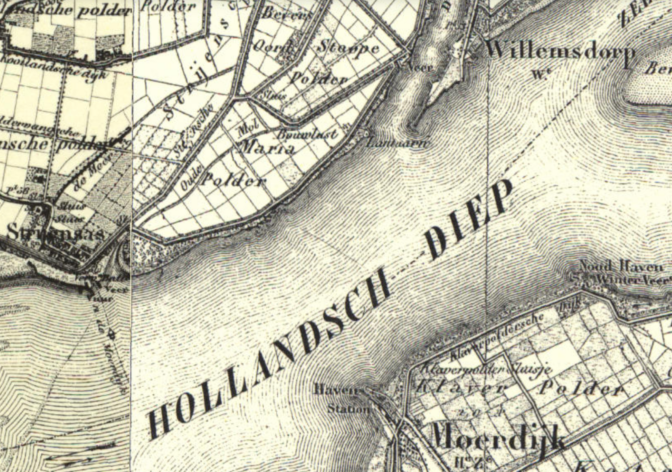