Ask Yvette – Does my family have a coat of arms?

Several people have contacted me wanting to know if they have a coat of arms or family crest. Please keep in mind that the following applies to the situation in the Netherlands; other countries have different rules and uses of coats of arms.

Four things to know about coats of arms

In other words, the answer to the question: “Does my family have a coat of arms?” is “only if you adopted one.” Anybody can choose to adopt a coat of arms, you don’t inherit one. 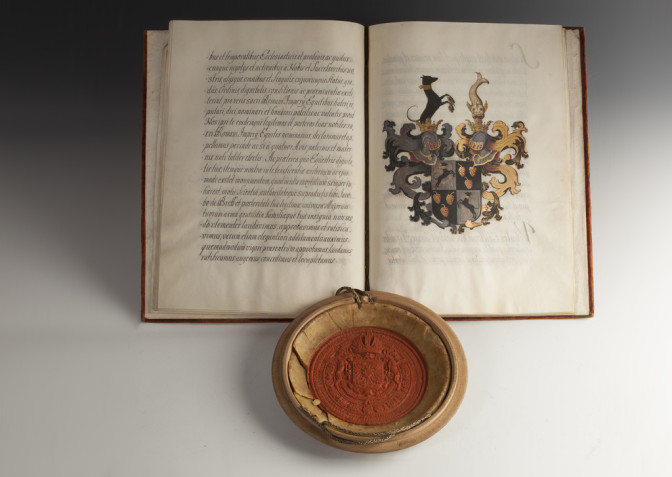 A more relevant question might be: “Did any of my ancestors use a coat of arms?”

The only way to answer this question is to find a source that includes your ancestor with the coat of arms. This requires that you first research your family tree. Simply finding a coat of arms with your name is not enough, there might have been many people by that name.

One way to find out which people used a crest is by checking the heraldic collections of the Central Bureau for Genealogy. These collections are being entered into the Heraldische Databank [Heraldic Database].

Beware of charlatans out there. There are several firms that will be happy to sell you a picture of “your” family crest. My grandmother had a lovely Marijnissen coat of arms on her wall, created by a research firm in the US. When I traced the image back to its source, I found that it was for a complete unrelated De Maurissens family. It appears that the firm just looked up the name in a book of arms and chose a coats of armsfor a name that had the most letters in common.

Needless to say, this was not our coat of arms. My Marijnissen ancestors were poor, so I haven’t been able to find a coat of arms and don’t expect I ever will.

How to adopt a coat of arms

If you want to adopt a family crest you have two options:

Have any of you found ancestors who used a coat of arms? Do you use one yourself? Please leave a comment and tell me about your coats of arms.

Filed Under: Blog Tagged With: heraldry