In response to an article about different types of archives, Larry Joosse wrote:

Looking for birth records for Anthonie de Wijze born March 2, 1886 in Zand, and Catharina Johanna vanKeulen born on July 16, 1888. they are my mother’s parents.

I thought I would respond in the form of a blog post and show you all the different steps that I take to find the answer. The methods I use to answer this question may also be helpful in finding your own ancestors.

Whenever I start working on a problem, I first analyze the information for any clues or problems. This is what I noticed about Larry’s question:

The information about these persons by themselves is not enough to uniquely identify them, so the first step is finding their marriage record. Most marriage records are indexed at WieWasWie, scans are available at Familysearch. The marriage supplements at Familysearch should tell us where and when they were born and who their parents were. This should allow us to find their birth records on Familysearch as well.

Step 3: Do the research

Find the marriage entry on WieWasWie

Whenever I need to find a marriage record between 1811 and 1932 and I don’t know where in the Netherlands the marriage took place, WieWasWie is my first stop. In the advanced search form I add a second person by clicking “Voeg een persoon toe” [add a person]. This allows me to search for records that name two people. Since WieWasWie only finds information that matches exactly what I type, I enter as little information as possible. In this case, I only fill in the last names of both spouses: Achternaam [last name]: Wijze for the “eerste persoon” [first person] and Achternaam: Keulen for the “tweede persoon” [second person] and press “Zoeken” [search].

WieWasWie – search form with Wijze and Keulen filled in

There are 14 results, which I sort by date by clicking the ‘Date’ column. One of the results is an index entry for a 1907 marriage record. This shows that Antonie de Wijze, a 21-year-old shop clerk born in Middelburg, married in Middelburg on 8 May 1907 to Catharina Johanna van Keulen, age 18, born in Domburg. His parents names are given as Adriaan de Wijze and Johanna Sturm; hers as Simon Adriaan van Keulen and Anna van den Werf. The bottom section of the index description gives us the information we need to locate the record: the event date, type, place and record number.

[Note: This section uses Genver, which has since been replaced by Geneal-IX, which works in a similar way.]

To locate a scan of a civil registration record, I use Genver.nl that has waypoints to the scans on Familysearch. On Genver.nl, I first click the province of Zeeland. This gives me an overview of all the municipalities in Zeeland. Next, I click the “BS” [Burgerlijke Stand = Civil Registration] link behind Middelburg. The 1907 marriage record should be in the “Huwelijken 1895-1912” [Marriage 1895-1912] record set, so I click that link which takes me to Familysearch. 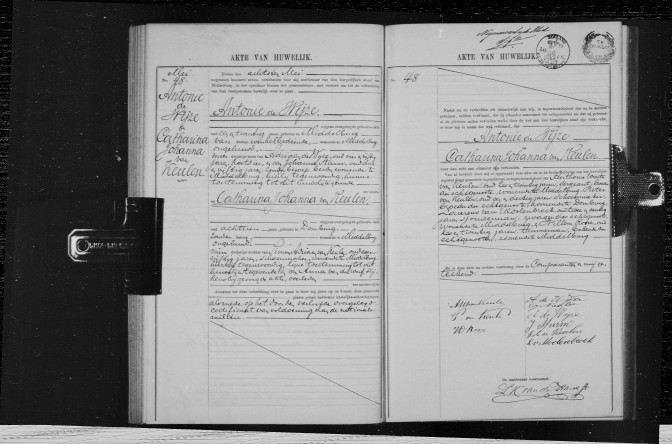 The marriage confirms all of the information from WieWasWie.

Now I correlate this information from the record with the information in the original question to see if I have the right couple. There are some minor discrepancies: the groom’s first name is Antonie instead of Anthonie, the bride’s name is Van Keulen instead of vanKeulen, and the birth place of the groom is Middelburg rather than Zand. These potential problems were already picked up during the initial analysis. These differences are only small, most of the information matches very well: the names almost match, the time period matches and their ages match the birth dates in the question. I conclude that this is indeed the marriage record of Larry Joosse’s grandparents.

Whenever I find a marriage record, I always consult the marriage supplements, the documents that the bride and groom had to submit. I go back to the page on Genver.nl for the civil registration records of Middelburg. This time, I look for the Huwelijksbijlagen (huw-bijl.) [marriage supplements]. The supplements for this marriage record should be in the set Huw-bijl. 1905-1908 v/a 33. Clicking the link takes me to the corresponding image set on Familysearch.

These birth dates are an exact match to the information in Larry Joosse’s original question and confirm that we’ve found the right couple. 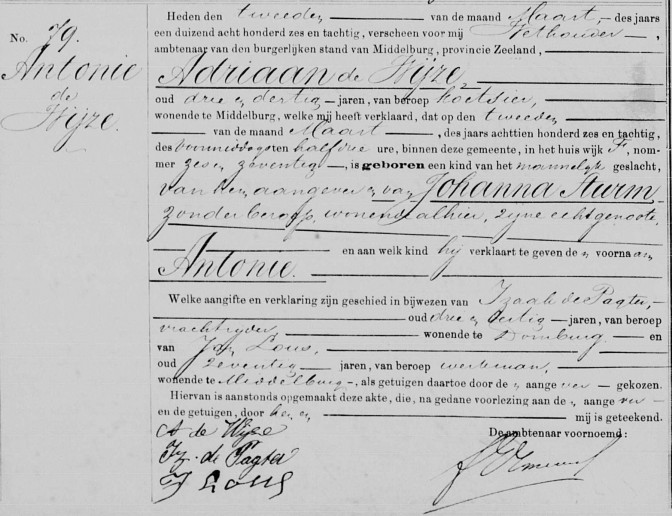 The record shows that Antonie de Wijze was born on 2 March 1886 at 2.30 AM in house district F number 76. The informant was Adriaan de Wijze, 33, coach driver, the father, who registered the birth the same day. He states that he is the father, and his wife Johanna Sturm is the mother. The record was created by an unnamed alderman and witnessed by Izaak de Pagter, 33, freight driver in Domburg and Jan Lous, 70, work man in Middelburg. The record was signed by the father and the witnesses. The signature of the last witness is very shaky.

To find Catharina Johanna van Keulen’s birth record, we return to Genver.nl. Domburg is also located in the province of Zeeland, so we click Zeeland, and then the BS [Civil Registration] link behind Domburg. The 1888 birth record should be in the record set Geboorten, Huwelijken, Overlijden 1883-1892; Tafels 1883-1892 [Births, marriages and deaths 1883-1892; indexes 1883-1892]. The title of the set suggests that births are listed first, so I start at page 20 of the 387 page record set. I end up in the table of birth records, not the actual birth records. I jump forward 50 pages to image 70. I now find myself in 1886 birth records, so I am in the right part of the set. After some more trial and error I find the birth record on image 95.

This record shows that Catharina Johanna van Keulen was born in Domburg on 16 July 1888 at 1 AM in house district A number 114a. Her birth was recorded the same day. The informant was her father Simon Adriaan van Keulen, 38, shoemaker living in Domburg. He declared that the child was born to him and his wife Anna van der Werf, without occupation. The record was witnessed by Cornelis Shout, 49, carpenter in Domurg and Huibert Marten Kesteloo, 45, secretary in Domburg. The record was signed by the father, the witnesses and the alderman.

Step 4: Research plan for next phase

After I achieve the goal, I always create a research plan for the next phase. Depending on what Larry Joosen would like to know next, some suggestions for the next steps are:

I hope this description of all the steps involved in tracing Larry Joosen’s grandparents’ birth records has given you some suggestions for your own research. If so, please leave a message. Also, feel free to ask a question that I can use as an example in a future post.