Marriage supplements: gateway to more information about your ancestors

Since the introduction of the civil registration in 1811, a bride and groom had to submit several documents to prove they were eligible to get married. Not only do these records tell you when your ancestors were born, but they may also provide information about their physical appearance, death dates of parents and previous spouses or even of their grandparents.  These documents are known as the ‘Huwelijksbijlagen‘ and most of them still exist and can be found online.

Contents of the marriage supplements

A typical set of marriage supplements contains at the very minimum:

Other documents that are often encountered as marriage supplements:

If both parents were deceased, the supplements may contain the death records of the grandparents.

If a required birth or death record did not exist anymore (for example because it burned or it took place before those records were kept), a notarized statement by witnesses (usually four) had to be submitted.

How to find marriage supplements

Sometimes the record numbers are displayed on every image, sometimes on a cover page. Marriage supplements of one marriage can run from 3 pages (military record plus two birth records) up to dozens of pages so finding a cover page can require some browsing. 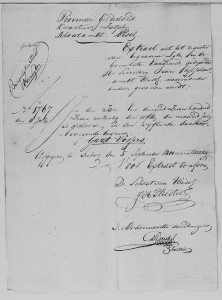 Extract of the burial record of Gart Vossers

Berend Gussinklo and Harmina Fukkink were married in Aalten on 27 October 1821. [And yes, that really was her name!]

This set is a great example of the amount of information you can find in a set of marriage supplements. Not only do we now know the birth dates and places of the spouses, we also know the names of their parents and know where and when they died. There are several pieces of information in this record that would have been hard to find otherwise:

How to use the information in the marriage supplements

When to search for marriage supplements

Marriage supplements were introduced in 1811 (or slightly earlier in Limburg and Zeeuws-Vlaanderen) and are public until 1932. Since they are such a rich use of information, I advise you to always pull the marriage supplements if you find a marriage record in the civil registration period.

Here are some examples of circumstances where they are especially useful:

Hat-tip to Mieke Meijlink-Roukens who pointed me to the Zeeuwen Gezocht page that said that National Militia Certificates were only required until 1911.