How to find the father of an illegitimate child

In most families, sooner or later you will encounter a child born to an unwed mother. Finding the fathers of these ‘illegitimate’ children can be difficult, but not necessarily impossible.

I’ve researched dozens of these cases, both in my own tree and for clients. In four cases, I have been able to prove who the father was. In two other cases, I have developed good theories which I hope to prove through DNA. In the majority of cases, I ended up with a list of possible fathers, but no clear candidates. With the growing popularity of DNA testing and advances in tools for exploring DNA matches, it may be possible to solve these cases in the future.

While working these cases, I developed some strategies that may help you with your own cases too. I will use anonymized examples from my own research to illustrate how you can find out who the father of the illegitimate child was. 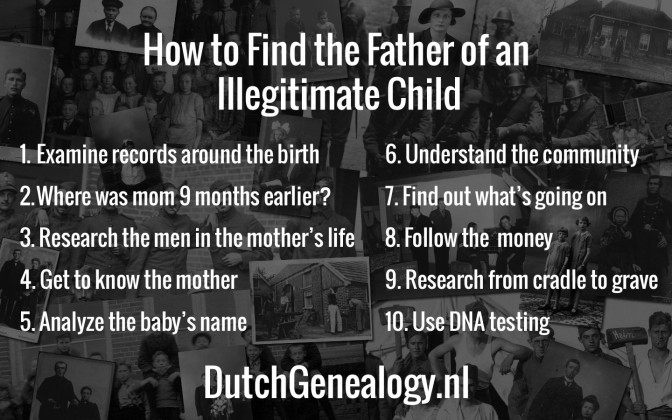 Strategy 1: Examine records from around the birth

Many unmarried women tried to hide their pregnancies so a pregnancy may have gone unnoticed in the community until the child was born. At that point, there are several possible records that may have been created: 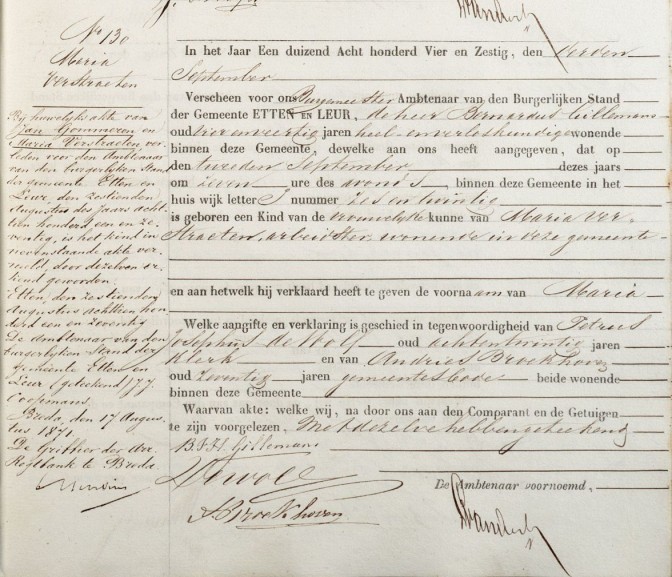 Even if one of these records states the name of the father, this does not prove his paternity as the mother could have been lying or may not have been certain about the identity of the biological father herself. Like all evidence, it must be analyzed for reliability and compared to other records.

In one case, I researched a woman who had eight illegitimate children. The informant on all the birth records was the same man. One of the children was born in another town. In that birth record, the man was not only listed as the informant, but also as the father. According to official instructions, clerks were not supposed to record the names of fathers of illegitimate children, but the clerk in the second town ignored that instruction and wrote it down anyway. Further research showed that they were living together the whole time so it is very likely that he was the father of the other children too.

Strategy 2: Find out where the mother was around the time of conception

If the child lived, the pregnancy was probably full-term or close to full-term. This means conception probably took place around nine months before the birth, but to be on the safe side I recommend using a slightly wider range of seven to ten months. Try to find out where the mother was living and working around the time of conception. Possible records to consult:

Strategy 3: Research the men in the mother’s life

Try to find out who the men in the mother’s life were, especially around the time of conception. Who was she living with? Who was she working for? Who were her neighbors? In one case, I discovered in the population register that the man who later married the mother was already living with her before the child was born.

As sad is it is to say, do not automatically exclude family members as potential fathers. I once found a court case where a stepfather was found guilty of sexual assault of a minor, his 16-year-old stepdaughter. A year after he got out of jail, she had an illegitimate child while still living at home. The stepfather was the informant on the child’s birth certificate. This does not prove that he was the father but the circumstances make him a likely candidate. I recommend that any adult (or at least: teenage) man in the mother’s life be treated as a candidate to be the father, regardless of whether he was related to the mother or not.

Records that can reveal which men were in the mother’s life are:

For each of the men, try to find out where they were in the period seven to ten months before the birth of the baby to see if you can rule any of them out.

Strategy 4: Get to know the mother

To speculate about the situations in which the mother may have gotten pregnant, it is important to try and get to know her. What was she doing for a living? How rich were her parents? How old was she when she got pregnant? What were her circumstances? A teenage servant girl who worked on a farm would find herself in different situations than a 40-year-old widow of an innkeeper.

For one of my ancestors who had two children out of wedlock, I investigated if she might have been a prostitute. To maximize your chances of finding the father, it is important not to make any assumptions or judgments and keep an open mind to all possibilities.

An important clue that the mother may have left you could be the baby’s name. Sometimes, unmarried women named the baby after the father, perhaps in kind remembrance or maybe in an attempt to persuade him to take responsibility. Dutch children were usually named after family members, so if the child has a name that does not occur in the mother’s family, that can be a clue to the father’s identity.

For this strategy, it is important that you know all the people in the mother’s family: parents, siblings, aunts, uncles and any close step-relati0ns. If the child is named after one of the maternal grandparents, that explains the name of the child and it does not help to find the father. But if the mother chose a different name, it may well point to the father’s identity. This is particularly interesting if the name is unusual and there was a man in the mother’s life with that name. 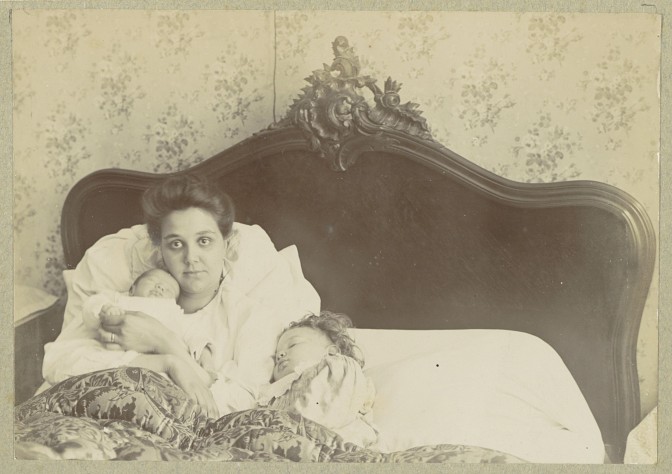 To understand how your female relative might have found herself pregnant, it is important to understand the community she lived in. A few questions you could ask are:

Answering these questions can be difficult. Perhaps someone is doing a one-place-study in the town where she was living in. Genealogists who do one-place-studies often have a good understanding of local traditions. If not, local genealogical societies might be able to help.

Strategy 7: Find out what was going on

Sometimes local events influenced how people behaved, which could result in pregnancy. A good example is the wave of ‘liberation children’ left behind by allied soldiers in World War II.

In order to understand if local events played a role in the conception, find out what was going on in the town about seven to ten months before the birth. Things to look out for are: 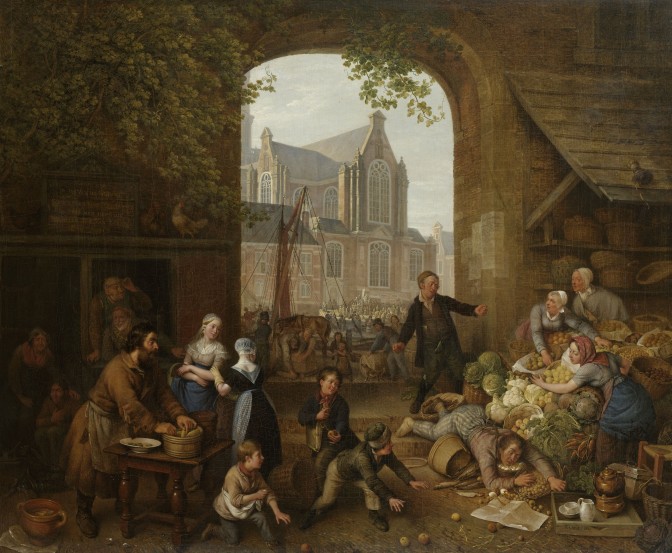 In rare cases, mothers sued the father for child support, for loss of virginity or for breach of promise. These cases can be found in court records.

I once found a 17th century case file before the Court of Gelderland where an unmarried mother sued the father of her child. She details how he seduced her in the garden of the minister for whom she was working as a servant. He did not deny this but brought in a witness who testified that he had also had carnal knowledge of her, casting doubt on her moral character and the paternity of the child. She denied this and produced evidence that the second witness was a first cousin to the father and thus not unbiased. Unfortunately, the verdict has not been preserved but I would say the preponderance of evidence was in her favor. While not all court cases are this informative, they can be helpful to create a list of candidates.

In another court case, a poor servant girl sued the rich farmer she was working for, but the rich farmer said she was involved with the hired hand instead. Without additional evidence it is hard to say who spoke the truth: it is understandable that the married farmer would like to shift blame if he was the father, but it is also possible that the mother chose a richer target to sue than a poor hand who could not provide for her or her child.

It is also worth investigating if the material wealth of the mother improved after the birth, indicating that perhaps she was paid off. I’ve heard several family stories where a poor servant girl is paid off by the rich farmer, who found her a husband to marry and gave them some land or a house. Circumstances that suddenly increase should set off alarm bells that perhaps the biological father may have been rich.

Strategy 9: Research from cradle to grave

If nothing else works, research the entire lives of the mother, child and any potential fathers that you have identified.

Did the potential father ever interact with the mother or the child at a later point? Sometimes fathers remained involved in the children’s lives even if they would or could not legally recognize them. Perhaps the candidate father witnessed records involving the child, or acted as godfather to his (grand)children. I have never seen a case in Dutch records where a father mentions an illegitimate child in his will, but that is easy to check too. Don’t dismiss their earlier lives either. The candidate father may have been named as the father of other illegitimate children, which gives you an idea about his character.

There could also have been an impediment that prevented the father from acknowledging the child at the time of the birth, for example if he was married and was unable to get a divorce. But if he later finds himself a widower, it is possible that he would then marry the mother. He would not be able to legitimize the child, as it was born when he was married, so the fact that he does not acknowledge the child does not say anything about him being the biological father. For any man that the mother marries, it is worthwhile to find out if he was in the picture around the time of conception.

Anybody who wanted to prove the paternity of a child today would turn to DNA. But DNA can even help solve older cases. There are several options.

If you have a candidate for the father, you can test specific people to see if they match. There are two options:

Finding the father of an illegitimate child is one of the hardest genealogical puzzles to solve. Often, the identity of the father will remain unknown but in some cases, enough evidence can be found to create a theory or even prove it.

Rarely are these cases solved by applying just one strategy. Developing good candidates for the father is often the result of extensive research into the records of the mother, child and potential father and acquiring detailed knowledge of the community that they lived in. Combining these traditional research methods with DNA testing can help to prove a theory.

Do you have illegitimate children in your family tree? Have you ever been able to find out who the father was? I would love to hear your strategies so please share them in the comments.