My client and friend Roberta Estes blogged about her great-grandfather, Hiram Bauke Ferverda (1854-1925). Her blog post tells about the early years of Hiram, who grew up in Friesland before emigrating to the United States at the age of 14, based on research I did for her. The article highlights the results and features Roberta’s own visits to the places where Hiram lived.

I thought I would share how I discovered Hiram Ferverda in Dutch records, a key step when researching immigrants, as an exampe of tracing immigrants.

Not so hopeless after all

I first contacted Roberta after a blog post in 2012, The DNA Pedigree Chart, where she remarked that “Dutch lines tend to be rather hopeless, especially when you’re back to when surnames were being formed, unless you know someone from that line to ask to test.” Never one to miss a challenge, I replied and explained the possibilities of Dutch research. Roberta was delighted, and blogged about this in her post Dutch Genealogy – Maybe Not So Hopeless After All.

Roberta hired me to research her Ferverda line. I’ve been working on different ancestors of hers since 2012 and found lots of interesting things and dozens of new ancestors. Definitely not a hopeless line! She’s been to the Netherlands twice so I’ve had the pleasure of showing her the places where her ancestors worked and lived. It’s a pleasure to work with Roberta: she wants to know everything about everybody, is excited about each little detail we discover, and is a joy to travel with 🙂 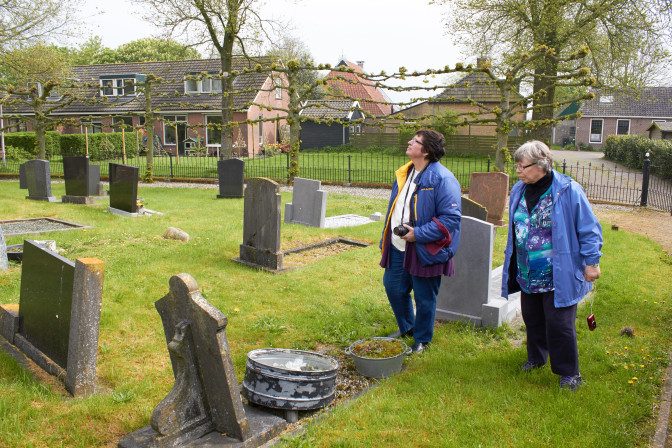 Roberta Estes and Cheryl Ferverda visiting graves at the Baard cemetery in Friesland. Photo by author.

According to his Indiana death record in 1925, Hiram B. Ferverda was born in the Netherlands on 21 September 1854 to Baker Ferverda and Gertrude DeYoung.1 He was enumerated as “Hiram Fewada” (14) in Union, Elkhart, Indiana in 1870, a few houses from “Bauge Fewerda” (40) his apparent wife Minke (30), and their two apparent daughters Betje (6) and Guetje (3).2

If you are familiar with Dutch names, you will recognize that these names are not Dutch and must have been Americanized.

“Ferverda,” “Fewada” and “Fewerda” sound like spelling variations of “Ferwerda,” a common name in Friesland. “DeYoung” sounds like a variation of “De Jong,” a name common throughout the Netherlands including in Friesland. “Baker” and “Bauge” might be Bauke, a typical Frisian name, and Gertrude could be anything from Geertruid to Geertje or Gerritje. “Hiram” is an English version of the Dutch Harmen/Herman/Harm, a name most often found in the northern and eastern provinces including Friesland.

Based on this analysis, we’re looking for a Bauke Ferwerda married to a Geertruid/Geertje/Gerritje de Jong, with a son named Harmen/Herman/Harm, probably from Friesland.

The next step is to search for Hiram in AlleFriezen, a website where all the public civil registration records of Friesland are indexed and scanned.

The Advanced Search form allows us to search for two persons at once. We’re not sure about the first names, so we don’t fill them in since Dutch search engines only find exact matches. We fill in the surnames “Ferwerda” and “Jong,” leaving of the prefix “De” which is considered a separate part of the name. The combination of Ferwerda and Jong gives us several hundreds of matches. Adding B* as first name for the father, and G* for the mother limits that to a more manageable eight hits.

One of these is for a Bauke Hendriks Ferwerda as “vader” [father] in an 1854 birth record. Could this be our guy? 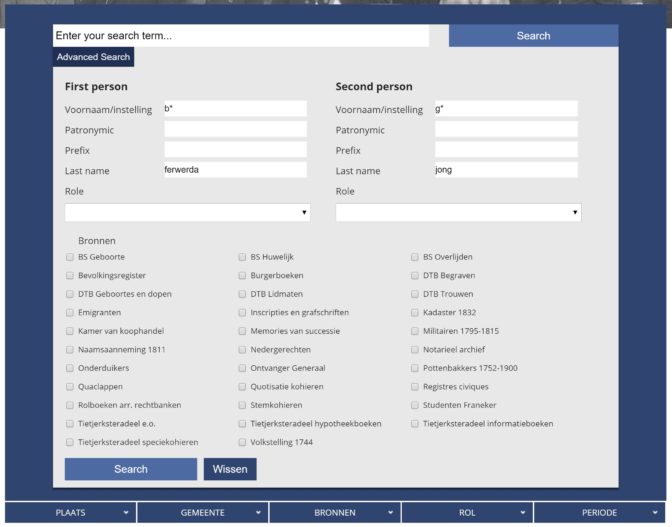 The search result page links to the detail page, with the indexed information and source citation. That page has a thumbnail that links to the scanned register.

In this case, the actual record is on the next page, not the page linked from the index entry. The register is indexed based on page numbers. Only the right pages are numbered, so the next page over is indexed under the same page number. So always turn the page if you don’t immediately see the record! 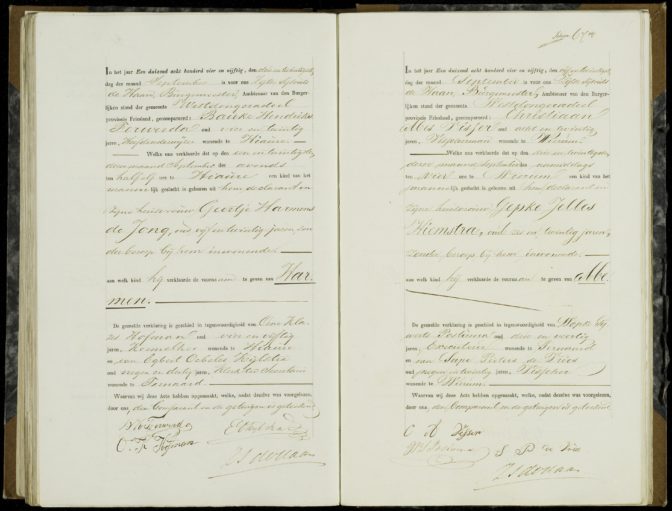 The birth record tells us that Bauke Hendriks Ferwerda, a 24-year-old head teacher in Hiaure, appeared before the mayor of Westdongeradeel on 23 September 1854, to inform him that his wife Geertje Harmens de Jong had given birth in their home to a son on 21 September at 10.30 PM.3

Comparing the birth and death record

Using a table can help to organize and compare the details.

The many parallels between these records strongly suggests this is the correct person.

When trying to prove a theory, it’s important to try and disprove it. If Harmen Ferwerda is the emigrant we’re looking for, there shouldn’t be a death record for him in the Netherlands.

An index of emigration records is available via gahetNA, the research website of the National Archives of the Netherlands. This index has an entry for Bauke Hendriks Ferwerda, leaving the municipality of Hemelumer Oldephaert en Noordwolde in 1868.

I consulted the original record on microfiche in the reading room of the Central Bureau for Genealogy which then held the microfiches of the most popular records of the National Archives. The reading room has since been closed. 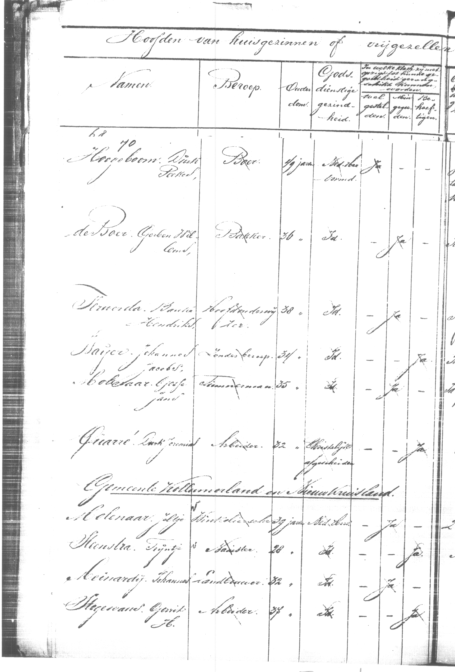 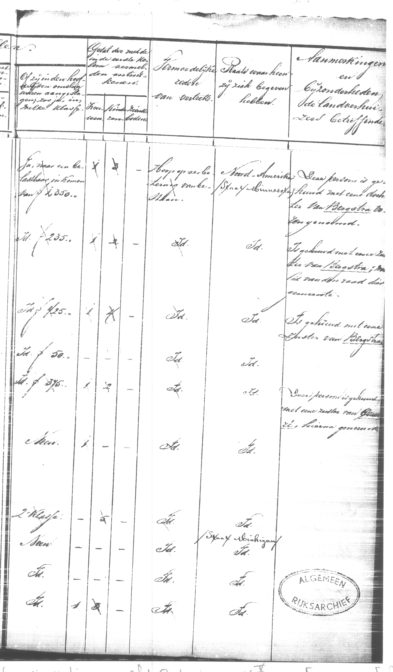 Was Bauke Hendriks Ferwerda, the 1868 emigrant from Hemelumer Oldephaert en Noordwolde, the same person as the father in the 1854 birth record of the child born in Hiaure? The matching occupation of head teacher suggests he was. These places would have been several hours apart but it was not unusual for young teachers to move around if a better position became available.

The name, and date and place of birth of Bauke Hendriks Ferwerda’s son Harmen Baukes Ferwerda match the child in the 1854 birth record. The wife in this record is different, but the record indicates they only married in 1863, suggesting that Geertje de Jong had died and Minke Gerbens van der Kooi was a second wife. 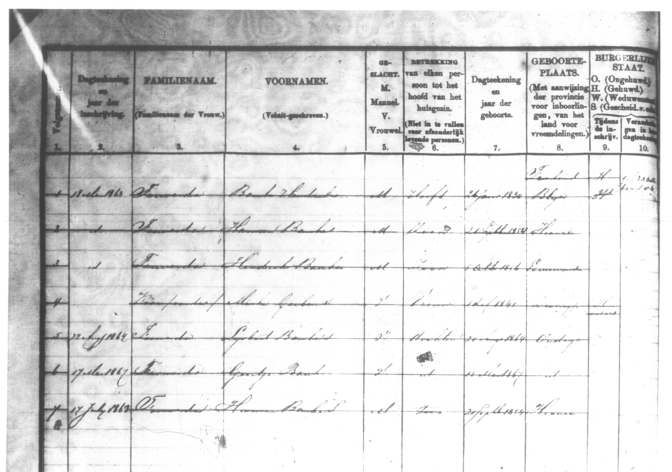 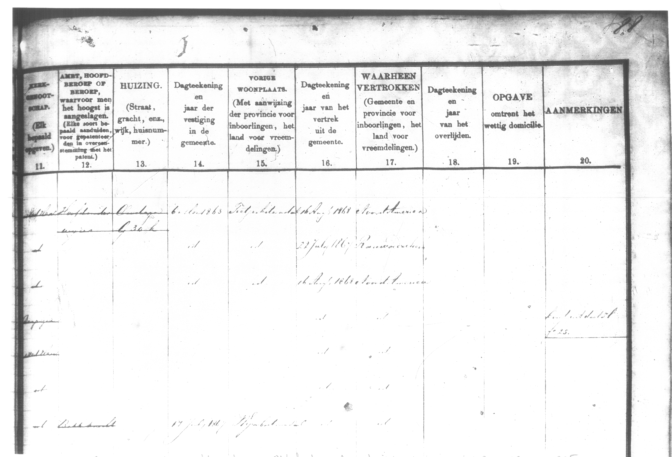 One question remained: on which ship did the Ferwerda family travel to the US? The family could not be found searching the Ancestry passenger lists for the different name variants encountered so far.

If you can’t find a person on a passenger list, try searching for other people who traveled in the same group. The 1868 emigration list from Hemelumer Oldephaert en Noordwolde told us the names of people who emigrated from the same municipality in the same year:

A search for Gerben Willems de Boer turned up the passenger list for the whole party.

On 5 September 1868, the S.S. Carroll arrived in Baltimore. Passengers included:

“B H Forward“? Really? That’s gotta be one of the more original mutilations of Dutch names I’ve ever come across.

But “Forward” sounds like it could be Ferwerda, written down by an Englishman who copied from another list and didn’t speak the language. The date also fits and shows the party arriving in Baltimore a month after they left Friesland. It is not uncommon for Frisian people to be recorded as German, since the Frisian language would have sounded similar to German to an English speaker.

This shows that the family travelled via Liverpool and Baltimore. This was a cheaper, though less comfortable route since it required more changes. The most likely route is that they travelled by boat to Amsterdam across the Zuiderzee, then by rail to Rotterdam, then by boat across the North Sea to Hull, by train across England to Liverpool, and then across the Atlantic by boat to Baltimore. Online indexes of incoming UK passenger lists only start in 1878, too late to include their voyage across the North Sea.8

We’ve found a candidate for Hiram B. Ferverda in Dutch records, traced him forward to a family that emigrated in 1868, and found a possible matching family in a Baltimore passenger list for that year. Another table helps us compare the composition of the family at the time of emigration with that on the passenger list and in the 1870 census.9

This shows that the composition of the household in these three sources has enough similarities to conclude that this is all the same family.

Hiram B. Ferveda was the same person as Harmen Baukes Ferwerda, born in Hiaure, Westdongeradeel, Friesland on 21 September 1854. His birth record identify his parents as Bauke Hendriks Ferwerda and Geertje de Jong. Their names closely resemble Hiram’s parents on his 1925 death certificate. That Harmen Baukes Ferwerda emigrated from Friesland in 1868 together with his father, stepmother, brother, and half-sisters. They traveled to the United States via Liverpool, England and arrived in Baltimore on the S.S. Carroll on 5 September 1868. The composition of that household at the time of emigration closely resembles that of the “Forward” family on the Carroll‘s passenger list and of Bauge Fewerda in Union Township, Elkhart, Indiana in the 1870 census two years later.

The combination of all these points of correlation proves that all the records are for the same person: Harmen Baukes Ferwerda, known as Hiram Ferverda in the US.