Quick tip – It’s All About the Dash

Take my ancestor Johannes Marijnissen (1806–1844), for example. That dash between his birth and death date represents a full, though short, life. A life in which he went to school long enough to be able to write, married, lost his mother, had children, lost a child, lost his wife, married again, worked, and bought a house. And, as I discovered in a newspaper, in which he witnessed the murder of his neighbor, Adriana Schoonen.1

The newspaper article tells how the the 67-year-old neighbor Alexander de Wijs killed his 72-year-old wife. When they initially started fighting, their son called in their next-door Johannes Marijnissen to mediate and help to calm things down. When the fight heated up again fifteen minutes later, the neighbor stuck his wife with a knife, and Johannes Marijnissen was again called in to help restrain the man. The wife was mortally wounded and died at the scene. The mayor was brought in and De Wijs was arrested. 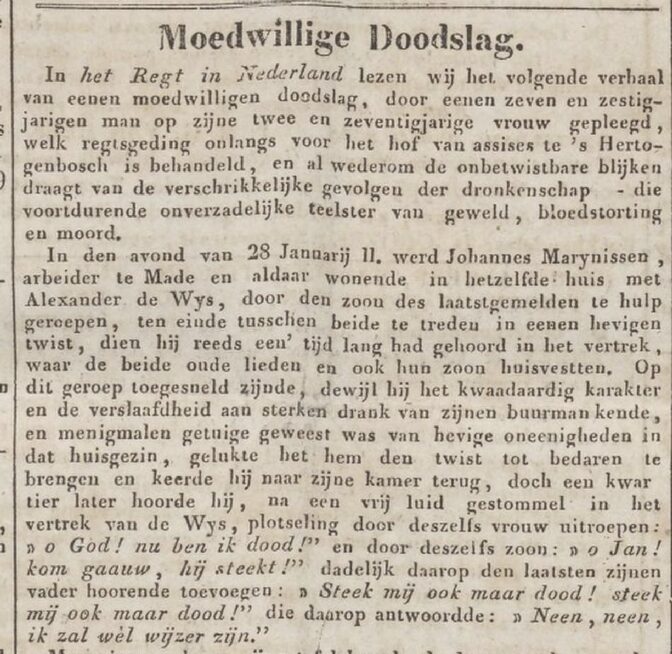 Alexander de Wijs was convicted to be taken to the place of execution and have a sword held above his head, and then to fifteen years confinement. He died in the prison in Leeuwarden a year later.2

I will be following up to see if the court documents tell me more about Johannes Marijnissen, who was called as a witness. But even this newspaper article tells me several things I did not know about him:

I had hoped that newspapers would shed more light on why he died at the age of 38, but I found a whole other story instead that helped me understand more about his life. It’s all about the dash.