In the nineteenth century, thousands of people emigrated from the area around Winterswijk to the United States. “Land movers”, they were called. Some left because of their religion, most in the hope of a better future. Among them there were several siblings of ancestors of mine. Curious what happened to them, I contacted their offspring on the internet. What began as a simple question (‘What happened to Gerrit Jan Droppers’) quickly turned into several long contacts and one of the closest friendships of my life. 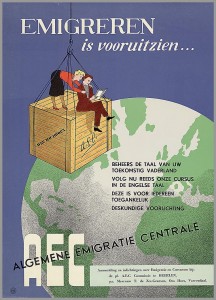 Emigration poster: an emigrant plans ahead

The first to respond was Mary Risseeuw from Wisconsin. As her name suggests, she is an American with Dutch roots. ‘100% Dutch’, she proudly says herself: her entire ahnentafel is Dutch. She’s no exception in the town she grew up in, Oostburg, Wisconsin. Most people there have names from the Achterhoek or Zeeland and many front yards proudly display a windmill. Mary researches Dutch families in Wisconsin and works for an historical research center. Together we’ve been able to help hundreds to find their relatives on the other side of the ocean.

While tracking down emigrants and their families, we use a lot of internet resources. In the Nationaal Archief, the National Archives of the Netherlands, lists of emigrants are kept. These lists were compiled by the provinces since 1848. The gahetNA website has an index to this source. In the United States, the emigrants who entered New York were received in Castle Garden and since 1892 on Ellis Island. Those passenger lists are also available online. The third important resource we use are the census records, the American registration of the population that takes place every ten years. Some of them can be accessed for free at Familysearch, but I mainly use Ancestry.com where all public census records are available if you have a (paid) subscription.

We also build on the work of other genealogists. A wonderful example of online collaboration is the website Find a Grave, where almost a million volunteers have published and indexed pictures of graves. In the United States, graves are rarely cleared, which means that most graves of emigrants still exist today.

Thanks to all these resources, I have been able to find out what happened to about three thousand of the over five thousand people who left the Winterswijk area. By researching an entire group like this, you discover patterns that would not be obvious otherwise. I give lectures about this topic, both in the Netherlands and in the United States. Thanks to a webcam and Skype, I don’t even have to travel.

And Mary? She now features in the Dutch civil registration. She was an official witness to my marriage.

This column first appeared in the magazine of the Central Bureau for Genealogy.