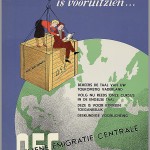 In the nineteenth century, thousands of people emigrated from the area around Winterswijk to the United States. "Land movers", they were called. Some left because of their religion, most in the hope of a better future. Among them there were several siblings of ancestors of mine. Curious what happened to them, I contacted their offspring on the … END_OF_DOCUMENT_TOKEN_TO_BE_REPLACED