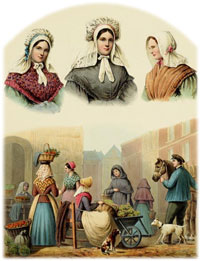 The capital city of Limburg is Maastricht. Other larger towns are:

Many people in Limburg used fixed family names long before the introduction of the civil registration which makes research easier. Most Limburg records are kept by the Limburg regional historical center. Unfortunately, the website is available in Dutch only.

Many marriage records from Limburg can be found in WieWasWie.

In the middle of the nineteenth century, Limburg was a poor region. People moved to urban areas or left the country to work in nearby Belgium or Germany or even to emigrate to the United States. Because of the American Homestead act of 1862, the peak of the Limburg emigration was in 1863. The people of Limburg were predominantly catholic and settled mainly in catholic regions of Minnesota. For more information about emigration from Limburg, see the Limburg emigrant page.

Images of Limburg can be found in several online resources:

Filed Under: Geography Tagged With: Limburg