Looking at old photos can tell you a lot about life in the times of your ancestors, even if the photos were not of your family.

Take this photo of an unidentified Winterswijk farm in 1937, for example. 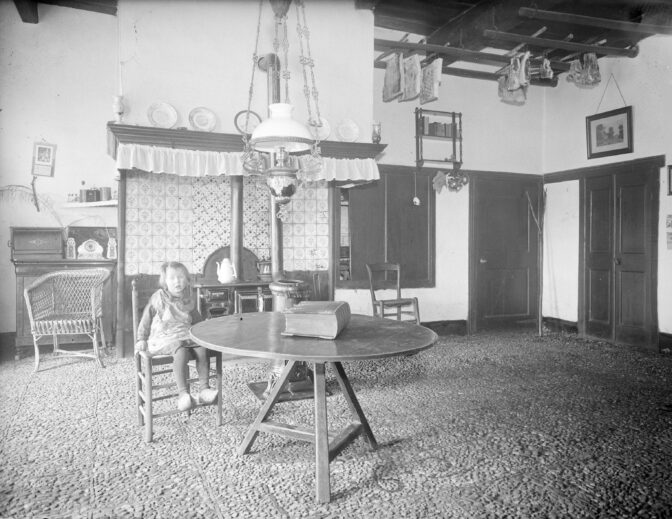 Since I am related to just about everyone from Winterswijk, the child in the photo is probably a distant cousin of mine. We can see that the she is wearing long stockings above her wooden shoes, telling us the photo was probably taken in winter. She is sitting on a wooden chair with a thatch seat. I used to help my aunt and uncle repair similar chairs, and remember the intricate work to make such seats from thatch.

The floor is inlaid with pebbles, traditional for Winterswijk farms. Different color pebbles made patterns. We can even see a date (1862?) and some initials, which may help us to identify the farm. We see a three-legged table, convenient for the uneven floor. Above the table is an oil lamp. On the table is a big book, probably a bible. More books can be found on the little shelf next to the door. Strangely, they are placed with the spine toward the wall, perhaps to protect the wall from the damage of the clasps that some of the books have. Clasps were mostly used on bibles, which indicates that this probably was a deeply religious family. The books were kept on a high shelf, only accessible for adults. At dinner time, the father would probably take the bible to read to his family.

In the center of the room is a stove, placed in the location of the former hearth. The backside of the hearth has floral tiles in a style that was popular in the 1850s. The hearth area must have been renovated sometime between 1850 and 1937, whereby the hearth was replaced with a stove. Decorative plates and vases were placed on the hearth ledge. These were rarely if ever used.

In the top right corner, sides of bacon hang from the ceiling. Originally, they would have been hung in the chimney, but after the removal of the hearth, that was no longer an option. The heat from the stove would probably still dry the meat, though it would not smoke it. Perhaps they was smoked before they were hung up.

A triangular shelf on the left of the hearth holds a coffee grinder and two containers, presumably for coffee and sugar. The neat desk underneath has two art deco vases with rather shabby peacock feathers. They form a set with the art deco clock. To the left we see a box, which I am not sure what it was used for. It may have been a breadbox.

The doors on the right probably opened to a bedstead, still a common way to sleep in the 1930s. The two doors next to the hearth probably also hid a bedstead originally, but the sneak peak we can take through the gap in the door shows it was probably a storage area by 1937.

I love studying photos like this, to see what details we can pick out about our ancestors’ lives. I took a House History module earlier this year, which helped me learn more about using architectural and design clues to understand how spaces functioned.

If you want to see more farm interiors, check out the free publication Binnen bij Boeren [Inside with Farmers; PDF], available from the Cultural Heritage Service.