Love speed skating? Your ancestors did too!

If there is one sport that the Dutch dominate, it is speed skating. It is the only Olympic sport where the orange team can win all three medals.

Our love for speed skating is not surprising if you understand the history of the Dutch landscape. Because large parts of the country are below sea level, the landscape is crisscrossed by little canals to drain the boggy land. Since many roads were inaccessible for large parts of the year, these canals were also the main transport routes. Barges would be used in the summer, but in the winter people would skate or use horse-drawn sleds to go from one place to another.

As early as the 18th century, matches were being held among the youngsters of the towns to see who could skate the fastest. This was especially popular in Friesland. The Leeuwarder Courant, the provincial newspaper of Friesland that was established in 1752, frequently reports about these events. 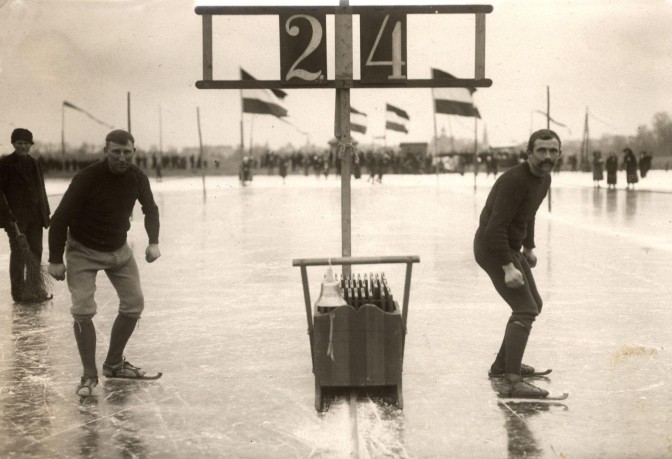 Here is an example of a newspaper report of a skating match:

Leeuwarden, 24 January [1829]
The announced speed riding on skates took place today, and was finished to the delight of the crowd of spectators; twenty-four of the best-known riders in this district competed for the rewards, of which the price, consisting in a nice gold pocket watch, was won by Halbe Huitema, living in Hommerts, and the premium, being a nice silver tobacco tin, by Jan Glats Scheepvaart, living in Ackrum.

Finding stories like these can make our ancestors feel like real people instead of just names on paper. By searching the archives of Dutch newspapers at the website Delpher, you can check for yourself if your own ancestors won any matches. Just search for the name of your ancestor in quotes: “Halbe Huitema” or add a word like hardrijderij  [speed riding] or schaatsen [skating/skates]. Please leave a comment if you find something interesting.