Before say 1800, taxes varied widely depending on the location. Several provinces instituted a mill tax; a tax on grinding grain. The tax could be levied in different ways. Often, a fixed sum was charged per head, with a reduced rate for children under 16. In some jurisdictions, the tax collector collected the taxes and recorded who paid what. In other jurisdictions, the tax was leased to the highest bidder, who would then collect the taxes and got to keep any profits above the paid sum.

In places where towns collected their own taxes, the mill tax records can be a great source of information. I have found many for my Noord-Brabant ancestors. They often start in the late 1600s and continue to the early 1800s. Several registers enumerate all the people in the household, including whether they are under or over 16, and act as a census substitute. Comparing them over time can help fill gaps in baptismal records, marriage records, and burial records, and can tell us when people moved. I often use them to estimate a time of death in places where burial records are unindexed, so I can narrow the search.

Most of these tax registers are part of the series of town records, kept in local or regional archive. It is worth checking the finding aids of the town records on the websites of these archives to see whether these records survive. They are increasingly being digitized, although they are typically not indexed. You will need to browse the registers page-by-page to find the people you are looking for.

When my ancestor Willemijn van Eersel died in Etten-Leur on 4 April 1830, her death record mentioned she was the daughter of Dionisius van Eersel and Maria Spikkers.1 The marriage record of this couple could easily be found. Nijs Peeterse van Eersel married Maria Marijnusse Spijkers in Etten on 23 April 1747.2 Nijs is the Dutch version of the Latin Dionisius. The baptismal register did not show a daughter Willemina, however.3

Mill tax records allow us to trace the family year-by-year, and we can see the family grow. Here is the entry for 1760-1761.4 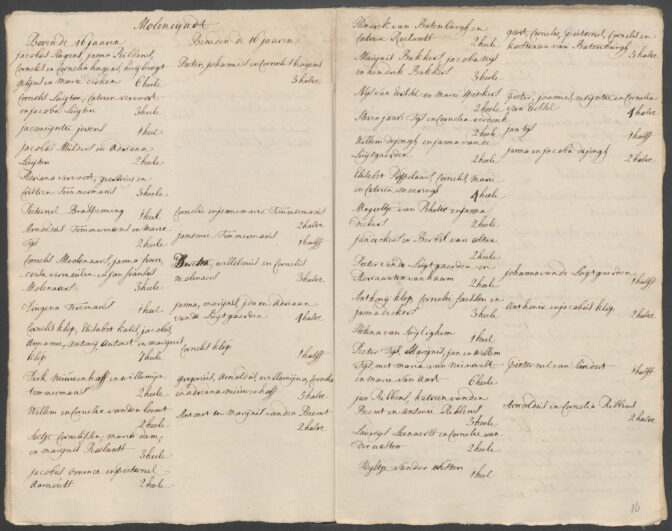 The entry shows the adults (“heele”, whole rate) in the left colum, which lists Nijs van Eersel and Marie Spiekers. Children under 16 (“halve”, half rate) are in the right column, which tells us they had children Pieter, Joannes, Meijntie and Cornelia. The lack of last name for the children implies they were the children of Nijs van Eersel and Marie Spiekers. Boys and girls working as farm hands would be noted with their own last names.

Below are all the entries for the family of Nijs van Eersel and Maria Spiekers in the mill tax records. When we compare the data from different years, we can see when each child joined the family.5

We can see that Nijs and Maria’s daughter Mijntje was also known as Willemijntje or Willemijn, the same name as the ancestor I was looking for. She first appeared in the mill tax records around 1749. When we take another look at the baptismal register in that period, we find the following entry.

We see that the name of the child was originally written down as “Wilhel” but then crossed out and corrected to “Jacoba”. Both Willemina and Jacoba (Jacomina) have “Mijntje” as a diminutive. The Roman Catholic records were kept in Latin, so the priest would take the Dutch name the parents wanted to give the child and write down the Latin version of the name. They may have told him their daughter was called Mijntje, which he turned into Jacoba in Latin.