My Native American DNA. Say what?

Always eager to try technological advances, I took an autosomal DNA test to see what that would tell me. One of the tools that you can use on Gedmatch tells you your admixture: the regions where your ancestors originally came from who contributed to your DNA. The methods to calculate this are still very much under development, but I find it fascinating. Many people put a lot of trust in the results and think they will point to a country of origin. But sometimes they are just plain wrong.

Using the Eurogenes K 13 algorithm, which I have read is appropriate to use when you’re of Western European descent like me, I checked my admixture. And there it was. I’m 1.15% Native American. My calculated percentage of “Amerindian” (as it is called by Eurogenes) is as high as 7.1% on chromosome 5 and 5.6% on chromosome 8.

Breakdown of admixture per chromosome

Had I been an American genealogist, I would have been jumping for joy since this confirmed the family story that my great grand-mother was a Native American princess.

But I’m not from the US and there is no family legend. I am from the Netherlands and none of my ancestors ever set foot in the Americas until after I was born.

I’m 99% Dutch, with all of my great-great-great-grandparents born in the Netherlands. My other DNA results proved that there were no non-paternal events in the last couple of generations. I have been able to trace most of my ancestors 10 generations back on the male and female lines and they are all Dutch, with the exception of two German branches and some French Huguenots going back to the 1500s and 1600s, plus a noble bastard line in the 1200s that traces to royalty throughout Europe, long before Columbus ever set foot on a ship. In other words: there is no way that I actually have Native American ancestors.

The ‘Chromosome painting’ shows where these segments of so-called Amerindian DNA can be found (the blue segments in the picture). It quickly becomes clear that most of these segments are in ‘noisy’ areas with a lot of different ethnicities showing. I suspect that the algorithm doesn’t know what this DNA is and makes different guesses for adjacent sections, leading to the false Amerindian result. 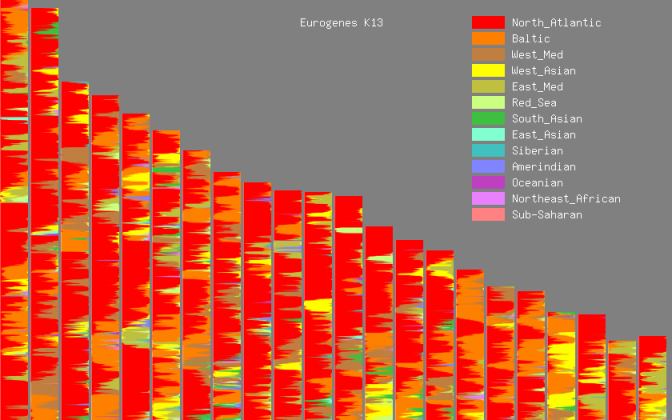 Still an art, not a science

My mother also took a DNA test and her admixture results show 0% Amerindian, so these ‘false positives’ must come from my father’s side. My father came from a very isolated community, where almost nobody ever moved in since around the year 1000. I have been able to trace all of his ancestors ten generations back, and they all come from within 10 miles from where he was born.

It’s possible that that side of my DNA has some characteristics that are not found in the rest of Europe. Many of the algorithms for determining admixture use very small reference populations, which probably did not include anyone from my father’s village. Since their isolated community may have preserved or introduced mutations that do not occur elsewhere, that might explain why the algorithm could not make sense of the DNA. Admixture analysis is evolving rapidly, but as Judy Russell put it: “it’s not soup yet”.1

Lesson learned: don’t put too much trust in admixture results

I hope that sharing my experiences with admixture tools has shown you that a little suspicion goes a long way. If your paper trail says one thing, and your admixture results say something else, check the chromosome painting to see how solid the blocks are on closer inspection. DNA doesn’t lie, but our interpretations sure can be incorrect!