While searching the notarial archives at the Amsterdam City Archives, I came across a record that tells how Dutch merchants took African slaves from Guinea and shipped them to the New World, trading some in the West Indies and taking the rest to New Netherland. As it is rare to find accounts of voyages of slave vessels, I thought I would share this document with you. 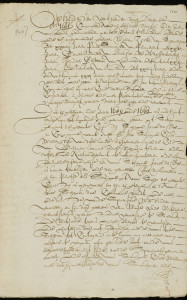 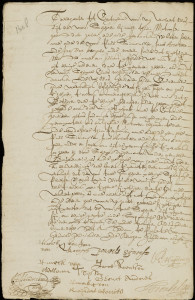 They declare at the request of Jan Kaspar Hattingh, merchant in Amsterdam, that they sailed in 1659, 1660 and the beginning of 1661 on the ship called “de Geboorte Christy” [The Birth of Christ], with skipper Jacob de Vos, accompanied by the vessel “St. Jan” [Saint John], with skipper Claes Willemsem.

They went to the coast of Guinea to take in negroes to transport those to New Netherland. During the voyage skipper Jacob de Vos died and said Claes Willemsen became skipper in his place.

Because of contrary winds, they landed at the Spanish West Indies, where they were forced to seek refreshments because of lack of water and victuals. They landed in Cartagena where they traded some negroes for supplies. The boat that was out to take in supplies was taken by the Spanish.

At Cartagena, the skipper transferred 10 sailors from the ship to prison, including said Paul Simonssen, Jacob Arentssen and Jan van Kampen, for reasons unknown to these men. Skipper Claes Willemsen was usually drunk. The skipper falsely accused them before the governor of having wanted to cut his throat. There was no truth to these accusations, since they always served him as honest sailors. Since they saw no other means to get out of prison, at that time they declared after severe threats by the governor,  and payment of their monthly wages and a little above, that the said two ships traded negroes for victuals in several Spanish places.

They declare that they only gave that deposition out of necessity. They never knew the ships to intend to trade in the Spanish West Indies.

This deposition, taken at the request of the merchant, was probably meant to account for his presence in the West Indies at a time when there was a trade embargo against Spain.

A chilling account of the Dutch role in the slave trade

This is the first document about the slave trade that I ever found myself. Since the Netherlands was very active in the slave trade, I have read about the slave trade before, but this is the first time that I’ve come across a reference in my own research. Even knowing how slaves were treated as goods, not people, it gives me chills to read about how casually these people were traded for victuals. It makes me wonder if the other people on board were relatives, and if families were split up between Africa, the West Indies and New Netherland. I will keep my eyes open for similar documents.
Reading this document made me wonder: are any of you descendants of African slaves in the New Netherland area? Might your ancestors have been on these ships?

Disclaimer
In this article, I translated the terms as used in the document. These terms can be offensive today, but reflect the viewpoints of that period. By staying true to the original documents, I hope to give some more insights into this sad part of our history.