The Gelders Archief just published many of their genealogical indexes as open data. This allows everyone to download the indexes and re-use them.

Being a bit of a geek, I could not resist downloading some of the sets for Winterswijk to see what I could do with them. Winterswijk is the town where my father was born, and most of his ancestors to0, and I have been working on a one-place-study of Winterswijk for over twenty years. I thought it would be fun to use Excel and see how Winterswijk names changed over time.

The first set I downloaded included the index of baptisms of 1669-1678, which had the names of the child, father and witnesses.

The top 10 male names in this period were:

This list shows how dominant the name Jan is: more than 1 in 7 people in the file was named Jan. If we leave out the female names, more than one in five men was named Jan. Its popularity was probably aided because Jan has no spelling variations, unlike Hinderck/Hindrick/Hijndrick or Berendt/Berent.

The top female names in this period were:

Jenneken, the female version of Jan, also heads this list. The women’s numbers are lower because many baptisms only list the name of the father, so men are over-represented.

Together, these top 10-names account for about 50% of all people mentioned in the records. This confirms my findings that people were not very creative when it came to choosing a name for their child. The strict naming traditions were a big part of this, since children were usually named after family members.

When it came to last names, there was a bit more diversity:

Together, the top 10 names account for just 6% of the people in the Winterswijk baptismal records. During this period, people in this area named themselves after the farms they lived on. There were hundreds of farms in the parish of Winterswijk, which explains why there are so many different names.

The two variations of Nijenhuis/Niienhuis together were the most popular name. Nijenhuis means “New House” and was a common name to give to a farm, and to the family who lived on that farm. 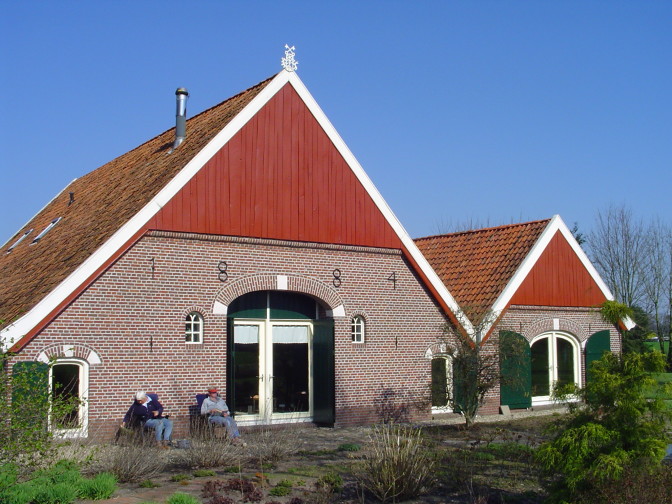 Farm in Winterswijk. Photo by author.

Let’s fast-forward 100 years and see what has changed. This data set covers baptisms for the period 1771-1806.

The most popular male names were:

We see that a major change has happened: instead of just one first name, most men now have two. The names themselves are still very similar to the ones we saw a century earlier. The singular “Jan” has dropped from first place to fifth, but is present in all except two of the top 10 names.

The most popular female names were:

Remarkably, only one of the top ten names for women if a double name: Janna Geertruid. Janna has replaced Jenneken as the most popular name; both are versions of Johanna. Gertken and Geesken, so popular in the 1600s, did not keep their top 10 position.

Nijenhuis has kept its position at the top of the list, but Schulten, which shared the number 1 position a century before, can no longer be found. This can probably be explained by the decline of the feudal system, which meant that “Schulten” [the main serfs who represented the land lords] were losing their function. Often, they were now named after the farm instead of by their title of Schulte.

These top 10 names now account for 15% of the names. This means that more people use the same names. I think this can be explained by the standardization of the spelling: the baptismal records in this period were much more consistent in how names were spelled.

Let’s forward another 100 years and see the names of the children and their parents in birth records in 1869. These data sets are organized by year.

The most popular male names were:

The transition from singular names to double names for men is now complete: all of the top 10 names are double names. Jan is still dominant and appears in 8 out of 10 names.

The most popular female names were:

Four of the ten most popular female names are now double names, but singular names have kept their popularity. The numbers are lower, even though these birth registers mention the children and both of their parents, so there should be an equal number of women and men. That means that there was a wider variety of women’s names than men’s names.

This list shows a lot of overlap with the 1771-1806 list. Oonk has become the most common name, which it remains to this day. Nijenhuis has remained a favorite and is the only name to occur in all three lists over the centuries.

Using open data sets like this allows us to do statistical analysis of data that can help us understand patterns. By studying the names in Winterswijk, we see how people started giving their children double names and how certain types of names emerged while others were abandoned.

Statistics can show us how common names were in a certain time and place. For example, if your ancestor seventeenth century ancestor was called Jan Nijenhuis, this analysis will tell you to watch out for same-named persons, as both Jan and Nijenhuis are very common names in the area at the time. It will also tell you that your eighteen century ancestor Garrijt Jan Meerdink may not have been named exactly after his grandfather, since double names were only just getting in vogue. He may have had a name added to his grandfather’s name or may have a combinaton of the names of both his grandfathers to make a double name.

If we compile larger databases with these names, it could help to find places of origin. In the nineteenth century, a name like Janna Geertruid or Hendrik Jan was specific to the eastern part of the Netherlands. Knowing where a name is popular can help you find the most likely place of origin of your immigrant ancestor, so you know where to start looking.

I would like to thank the Gelders Archief for making their data available to us in this manner. It is so convenient to be able to import the data into Excel and use pivot tables to analyze the data. The analysis that went into this article took less than an hour to do. I hope this example inspires you to do some analysis on the data from the area where your ancestors come from.