Q&A about ‘From Winterswijk to Wisconsin’

I’ve just finished answering a series of questions by people attending the Dutch in Wisconsin conference. I gave a speech about the emigration from Winterswijk to Wisconsin in the nineteenth century. Here are the questions that I got and the answers I gave. I have expended some of the answers because I was able to do a little research.

How is it that many of the names you showed us ended in –ink, but not Kastein?

People in the eastern part of the Netherlands and the neighboring German area, including Winterswijk, were named after the farms they lived on. Many old farms were established before the year 1200. These farms often have the suffix –ink, which means ‘belongs to’, or ‘of the clan of’. For example: ‘Hoitink’ originally was ‘Hoikink’ which means ‘of the clan of Hoiko’, an ancient Saxon first name. Later farms got different names so Kastein must be a later farm than Hoitink. See my article about farm names and my article on suffixes in Dutch names for more information.

Is ‘Glewen’ a farm name as well?

The original name was ‘Glieuwen’. Glieuwen is indeed a farm, in the hamlet of Woold. In fact, I was there a couple of years ago and it now has a railroad running right past it, so it may have been a nicer place to live back then than it is now!

Was the cholera outbreak in the 1840s a factor in the emigration?

I think it may not have been the single reason, but one of the many factors that led people to emigrate for economical reasons. The cholera outbreaks probably made them realize that their children may have a better future elsewhere.

What was the effect of the Phoenix disaster on emigration from Winterswijk?

As Mary Risseeuw will tell more about this tomorrow, I will only give a short answer. I think the Phoenix disaster is one of the major causes for the huge drop in emigration rates in 1848-1853.

Do you know anything about the Stemerdink and ter Haar families?

You mean besides the fact that these names are in my family tree as well? These are Winterswijk families that emigrated to Wisconsin. I have researched the ancestors of this couple, they are in my database: Jan Stemerdink and Janna Frederica ter Haar.

Is it true that Winterswijk Catholics had their children baptized in Süderwick?

Before 1795, Roman Catholics were not officially allowed to worship. For areas near the border, the papacy established new chapels just across the border in Germany. Roman-Catholics from Winterswijk had their children baptized in several different chapels, depending on in which hamlet they lived. People from Meddo, which had the largest Catholic population, went to Zwillbrock; people from Kotten, Brinkheurne and Ratum went to Oeding. None of them went to Süderwick, this was a dozen miles further south and is where the Roman-Catholics from Dinxperlo had their children baptized. The Aalten and Bredevoort Catholics went to the Kreuzkapelle (chapel of the cross) just across the German border there.

It is good to know that Süderwick and Dinxperlo are really, REALLY close together. There is one road that is the border, houses on one side are Dutch, houses on the other side are German. You could say that the dotted line seperating the lanes is the dotted line you see on the map marking the border! No wonder the Dinxperlo Catholics worshipped in Süderwick while the Süderwick Protestants worshipped in Dinxperlo, they just had to cross the street.

There were two Ten Dolle sisters who emigrated as maids. Would they have expected to see their family again?

The case of these Ten Dolle women is slightly different. Although they emigrated as maids, their parents were already in the United States. Gerrit Hendrik ten Dolle and his wife Engele Geertruid Annevelink emigrated together with most of their children in October, 1846. Their daughter Willemina ten Dolle emigrated a year later with the Wilterdink family where she served as a maid. They ended up on the Phoenix and the entire party perished, safe for the husband (Hendrik Jan Wilterdink) and Willemina ten Dolle. They married each other and started a new family. I don’t know which of her sisters is the one that was referred to in the question. 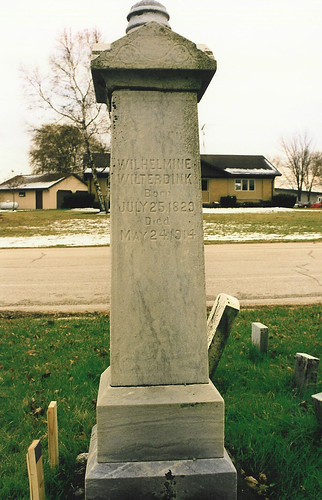 I heard a story that in the 1870s, the Germans came across the border to force men into the military and my Debbink ancestors emigrated to avoid that. Do you know anything about that?

I don’t know this particular story but the 1870s was the time of the German/French war so it could have happened. I will check the lists of emigrants at the National Archives in The Hague to see if anybody officially lists this as a reason to emigrate.

What was the percentage of seceders in the total amount of emigrants?

I don’t know exactly, I haven’t done the numbers. My rough estimate that in the 1840s they may have comprised as much as 50% of the total number of emigrants from Winterswijk, while their numbers dwindled to probably just a couple of percents after 1850.

Is it true that the Zeeland and Gelderland people didn’t like each other very much and didn’t intermarry at first?

I have seen a trend that the first generation tends to marry within their own province or even town that they came from. The second generation and later tends to still marry within the Dutch community, but not necessarily within their own province where they came from. We have to keep in mind that this may have something to do with the fact that they were learning English. Although both the Gelderland and the Zeeland people came from the Netherlands, they spoke very different dialects which would make it very hard to understand each other. Perhaps speaking a common language was a factor in the blending of the Gelderland and Zeeland immigrants.

The list was just a very small sample of names of emigrants in my database. So far, I’ve researched 2,200 emigrants, who have at least several hundreds of family names between them. I just picked a sample, in which I deviously included some families of which I knew descendants to be in the audience!

You can find all these 2,200 emigrants in my genealogical database, including a couple of Obbinks. Feel free to contact me to ask for more information as I’ve got other sources at home that I haven’t processed into my database yet.

This question was asked after we stopped the plenary session.

You can search the phone book of the Netherlands yourself at www.detelefoongids.nl. In the green rectangle fill in the last name in the ‘Wie’ (who) textbox and fill in the town (e.g. Winterswijk, Aalten, Dinxperlo) in the ‘Waar’ (where) textbox. Then click ‘Zoek’ (search). It will give you a list of names, addresses and phone numbers. If you do want to call one of your long lost cousins, the international access code of the Netherlands is +31 and you have to drop the first 0 of the phone number!

Do you have any information about the Ten Pas family?

This question was also asked after we stopped the plenary session.

I’ve got several people named Ten Pas in my database, you can check for yourself or contact me directly.

I’ve seen plat maps of Aalten and Winterswijk of 1832 where I could see where the farms were. Do you know where I can find more recent ones?

This is another question that was asked to me one on one afterwards.

Maps of the 1840s can be found in the Nationaal Archief image bank, it has maps of Aalten, Winterswijk and lots of other areas.

Some nice maps of the 1860s can be found at Atlas 1868. These are less detailed so they only show the major farms but they may still be interesting.

For current maps, you can visit Google Maps and zoom in, although it does not list the names of the farms explicitely. However, since most roads are named after the most important farms on the roads, you can still get some idea.

People interested in the 1832 maps mentioned in the question should visit ‘Wat Was Waar’ (What Was Where). Use the mouse wheel to zoom in and then click the area you’re interested in. It will pull up a list of maps on the right, including the ‘Minuutplan’ (minute plat map) of 1832.